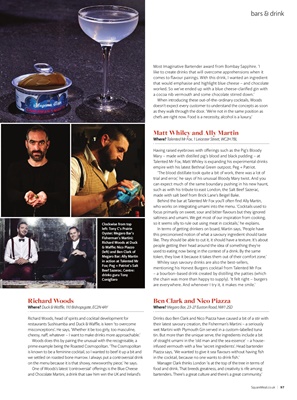 Richard Woods, head of spirits and cocktail development for

restaurants Sushisamba and Duck  Wa e, is keen 'to overcome

misconceptions'. He says, 'Whether it be too girly, too masculine,

cheesy, na, whatever - I want to make drinks more approachable.'

Woods does this by pairing the unusual with the recognisable, a

is known to be a feminine cocktail, so I wanted to beef it up a bit and

we settled on roasted bone marrow. I always put a controversial drink

on the menu because it is that showy, newsworthy piece,' he says.

One of Woods's latest 'controversial' oerings is the Blue Cheese

and Chocolate Martini, a drink that saw him win the UK and Ireland's

Most Imaginative Bartender award from Bombay Sapphire. 'I

like to create drinks that will overcome apprehensions when it

comes to �avour pairings. With this drink, I wanted an ingredient

that would emphasise and highlight blue cheese - and chocolate

worked. So we've ended up with a blue cheese-claried gin with

a cocoa nib vermouth and some chocolate stirred down.'

When introducing these out-of-the-ordinary cocktails, Woods

doesn't expect every customer to understand the concepts as soon

as they walk through the door. 'We're not in the same position as

chefs are right now. Food is a necessity, alcohol is a luxury.'

Having raised eyebrows with oerings such as the Pig's Bloody

Mary - made with distilled pig's blood and black pudding - at

'The blood distillate took quite a bit of work, there was a lot of

trial and error,' he says of his unusual Bloody Mary twist. And you

can expect much of the same boundary pushing in his new haunt,

such as with his tribute to east London, the Salt Beef Sazerac,

made with salt beef from Brick Lane's Beigel Bake.

who works on integrating umami into the menu. 'Cocktails used to

focus primarily on sweet, sour and bitter �avours but they ignored

saltiness and umami. We get most of our inspiration from cooking,

so it seems silly to rule out using meat in cocktails,' he explains.

In terms of getting drinkers on board, Martin says, 'People have

this preconceived notion of what a savoury ingredient should taste

like. They should be able to cut it, it should have a texture. It's about

people getting their head around the idea of something they're

used to eating now being in the context of a drink. By the same

token, they love it because it takes them out of their comfort zone.'

- a bourbon-based drink created by distilling the patties (which

the chain was more than happy to supply). 'It felt right - burgers

are everywhere. And whenever I try it, it makes me smile.'

their latest savoury creation, the Fisherman's Martini - a seriously

wet Martini with Plymouth Gin served in a custom-labelled tuna

tin. But more than the unique serve, the ingredients include a bit

Piazza says, 'We wanted to give it sea �avours without having sh

in the cocktail, because no one wants to drink sh.'

food and drink. That breeds greatness, and creativity is rife among

(left) and Ben Clark of

in action at Talented Mr