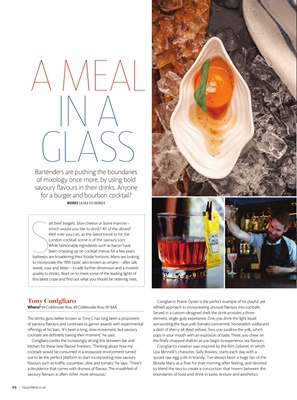 of savoury �avours and continues to garner awards with experimental

oerings at his bars. 'It's been a long, slow movement, but savoury

cocktails are denitely having their moment,' he says.

Conigliaro credits the increasingly strong link between bar and

kitchen for these new �avour frontiers. 'Thinking about how my

cocktails would be consumed in a restaurant environment turned

out to be the perfect platform to start incorporating new savoury

�avours such as tru e, cucumber, olive and tomato,' he says. 'There's

a decadence that comes with dryness of �avour. The mouthfeel of

Conigliaro's Prairie Oyster is the perfect example of his playful, yet

Served in a custom-designed shell, the drink provides a threeelement,

single-gulp experience. One, you drink the light liquid

a dash of sherry, all dyed yellow). Two, you swallow the yolk, which

pops in your mouth with an explosion of taste. Three, you chew on

the nely chopped shallots as you begin to experience sea �avours.

Conigliaro's creation was inspired by the lm Cabaret, in which

Liza Minnelli's character, Sally Bowles, starts each day with a

spiced raw egg yolk in brandy. 'I've always been a huge fan of the

Bloody Mary as a xer for that morning-after feeling, and decided

boundaries of food and drink in taste, texture and aesthetics.'

Bartenders are pushing the boundaries

of mixology once more, by using bold

savoury �avours in their drinks. Anyone

for a burger and bourbon cocktail?

which would you like to drink? All of the above?

Well now you can, as the latest trend to hit the

London cocktail scene is of the savoury sort.

While fashionable ingredients such as bacon have

been cropping up on cocktail menus for a few years,

barkeeps are broadening their foodie horizons. Many are looking

to incorporate the 'fth taste', also known as umami - after salt,

sweet, sour and bitter - to add further dimension and a moreish

quality to drinks. Read on to meet some of the leading lights of

this latest craze and nd out what you should be ordering next.