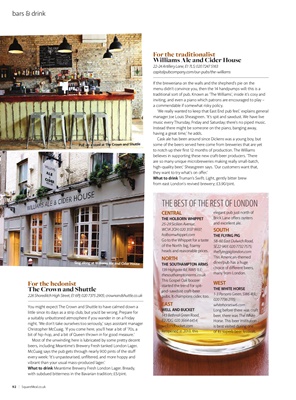 The Crown and Shuttle

little since its days as a strip club, but you'd be wrong. Prepare for

a suitably unbuttoned atmosphere if you wander in on a Friday

night. 'We don't take ourselves too seriously,' says assistant manager

Christopher McCuaig. 'If you come here, you'll hear a bit of '70s, a

bit of hip-hop, and a bit of Queen thrown in for good measure.'

Most of the unwinding here is lubricated by some pretty decent

every week: 'It's unpasteurised, unltered, and more hoppy and

vibrant than your usual mass-produced lager.'

with subdued bitterness in the Bavarian tradition; £5/pint.

menu didn't convince you, then the 14 handpumps will: this is a

traditional sort of pub. Known as 'The Williams', inside it's cosy and

inviting, and even a piano which patrons are encouraged to play -

manager Joe Louis Sheasgreen. 'It's spit and sawdust. We have live

music every Thursday, Friday and Saturday; there's no piped music.

Instead there might be someone on the piano, banging away,

having a great time,' he adds.

Cask ale has been around since Dickens was a young boy, but

to notch up their rst 12 months of production. The Williams

believes in supporting these new craft-beer producers. 'There

are so many unique microbreweries making really small-batch,

Go to the Whippet for a taste

of the North: big, foamy

started the trend for spitand-sawdust

pubs. It champions cider, too.

Long before there was craft

beer, there was The White

is best visited during one

of its superb beer festivals.

THE BEST OF THE REST OF LONDON

Pull up a stool at The Crown and Shuttle

Sing along at Williams Ale and Cider House