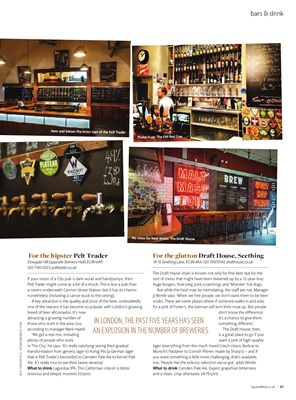 For the hipster Pelt Trader

If your vision of a City pub is dark wood and handpumps, then

Pelt Trader might come as a bit of a shock. This is less a pub than

a cavern underneath Cannon Street Station, but it has its charms

nonetheless (including a canoe stuck to the ceiling).

A key attraction is the quality and price of the beer, undoubtedly

breed of beer acionados. It's now

attracting a growing number of

those who work in the area, too,

according to manager Mark Hazell.

'We get a real mix, including

plenty of people who work

in The City,' he says. 'It's really satisfying seeing their gradual

transformation from generic lager to König Pils [a German lager

Ale. It's really nice to see their tastes develop.'

What to drink Lagunitas IPA. This Californian import is bitter,

For the glutton Draft House, Seething

sort of menu that might have been dreamed up by a 12-year-boy:

But while the food may be intimidating, the sta� are not. Manager

JJ Wintle says: 'When we hire people, we don't want them to be beer

snobs. There are some places where if someone walks in and asks

for a pint of Foster's, the barman will turn their nose up. But people

it's a chance to give them

The Draft House, then,

is a good place to go if you

want a pint of high-quality

lager (everything from the much-loved Czech classic Budvar to

Munich's Paulaner to Cornish Pilsner, made by Sharp's) - and if

you want something a little more challenging, that's available,

too. 'People like the eclectic selection we've got,' adds Wintle.

IN LONDON, THE PAST FIVE YEARS HAS SEEN

AN EXPLOSION IN THE NUMBER OF BREWERIES

Here and below: the brass taps of the Pelt Trader

No room for beer snobs: The Draft House

Pump it up: The Old Red Cow