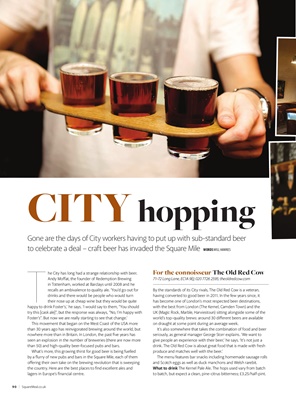 The City has long had a strange relationship with beer.

in Tottenham, worked at Barclays until 2008 and he

recalls an ambivalence to quality ale. 'You'd go out for

drinks and there would be people who would turn

their nose up at cheap wine but they would be quite

happy to drink Foster's,' he says. 'I would say to them, "You should

try this [cask ale]", but the response was always, "No, I'm happy with

Foster's". But now we are really starting to see that change.'

than 30 years ago has reinvigorated brewing around the world, but

nowhere more than in Britain. In London, the past ve years has

than 50) and high-quality beer-focused pubs and bars.

What's more, this growing thirst for good beer is being fuelled

by a urry of new pubs and bars in the Square Mile, each of them

the country. Here are the best places to nd excellent ales and

For the connoisseur The Old Red Cow

By the standards of its City rivals, The Old Red Cow is a veteran,

having converted to good beer in 2011. In the few years since, it

has become one of London's most respected beer destinations,

with the best from London (The Kernel, Camden Town) and the

UK (Magic Rock, Marble, Harviestoun) sitting alongside some of the

on draught at some point during an average week.

It's also somewhere that takes the combination of food and beer

seriously, as general manager George Storr explains. 'We want to

give people an experience with their beer,' he says. 'It's not just a

drink. The Old Red Cow is about great food that is made with fresh

produce and matches well with the beer.'

and Scotch eggs as well as duck manchons and Welsh rarebit.

What to drink The Kernel Pale Ale. The hops used vary from batch

to batch, but expect a clean, pine-citrus bitterness; £3.25/half-pint.