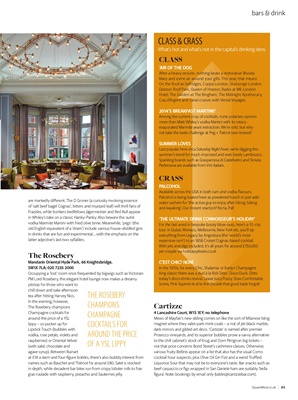 What's hot and what's not in the capital's drinking dens

'AIR OF THE DOG

After a heavy session, nothing beats a restorative Bloody

Mary and some air around your gills. This year, that means

On the Roof at Selfridges, Coppa London, Skylounge London,

Dalston Roof Park, Queen of Hoxton, Radio at ME London

Hotel, The Garden at The Bingham, The Midnight Apothecary,

Among the current crop of cocktails, none polarises opinion

not take the taste challenge at Peg + Patriot (see review)?

summer's trend for much improved and ever-lovely Lambrusco.

Sparkling brands such as Grasparossa di Castelvetro and Tenuta

Pederzana are available from Vini Italiani.

Available across the USA in both rum and vodka  avours,

Palcohol is being touted here as powdered hooch in just-addwater

sachets for 'the active guy to enjoy after hiking, biking

and kayaking'. Our instant reaction? No ta, Pal!

For the last word in bespoke boozy blow-outs, here's a 10-city

everything from Legacy by Angostura (the 'world's most

In the 1970s, for every Chic, Shalamar or Evelyn Champagne

magnet where they valet-park mink coats - a riot of jet-black marble,

Prosecco vineyards, and its superior bubbles prove a savvy alternative

Liquorice Sour that may notables@cartizzebar.com taste. Bar snacks such as

of 'salt beef bagel Cognac', bitters and mustard leaf) will thrill fans of

in Whiley's take on a classic Hanky-Panky. Also beware the outré

old English equivalent of a 'dram') include various house-distilled gins

Occupying a 'lost' room once frequented by bigwigs such as Victorian

pitstop for those who want to

chill down and take afternoon

In the evening, however,

around the price of a YSL

lippy - so pucker up for

(with saké, chocolate and

at £18 a stem and four- gure bottles, there's also bubbly interest from

names such as Bauchet and Thiénot for around £80. Saké is stocked

in depth, while decadent bar bites run from crispy lobster rolls to foie

OF A YSL LIPPY