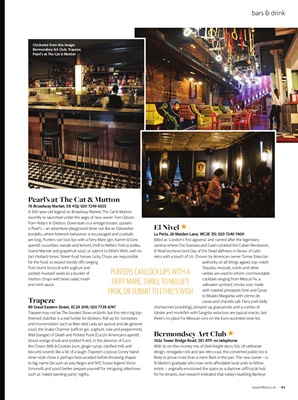 Pearl's at The Cat & Mutton

A 300-year-old legend on Broadway Market, The Cat � Mutton

recently re-launched under the aegis of new owner Tom Gibson,

from Ruby's in Dalston. Downstairs is a vintage boozer, upstairs

is Pearl's - an adventure playground done out like an Edwardian

bordello, where kittenish behaviour is encouraged and cocktails

are king. Punters can lock lips with a Fiery Mare (gin, Kamm � Sons

Grand Marnier and grapefruit sour), or submit to Ethel's Wish, with its

for the food, so expect trendy ris ranging

from burnt broccoli with yoghurt and

pickled mustard seeds to a bucket of

Trapeze may not be The Greatest Show on Earth, but this retro big topthemed

club/bar is a real funfair for drinkers. Roll up for 'curiosities

blood orange shrub and pickled fruits). In the absence of Coco

biscuits) sounds like a bit of a laugh. Trapeze's copious Coney Island

Simonelli; and you'd better prepare yourself for intriguing sideshows

such as 'naked painting party' nights.

Billed as 'London's rst agavería' and named after the legendary

cantina where Che Guevara and Castro plotted the Cuban Revolution,

retro with a touch of LA. Chosen by American owner Tomas Estes (an

authority on all things agave), top-notch

Tequilas, mezcals, sotols and other

rarities are used to inform commendable

cocktails ranging from Mezcal Fix, a

with roasted pineapple, lime and Cynar,

to Mulato Margarita with crème de

chicharones (crackling), pimped-up guacamole, and a combo of

lobster and monksh with Sangrita reduction are typical snacks, but

there's no place for Mexican vino on the Euro-accented wine list.

likely to prove more than a mere ash in the pan. The new owner - a

artists - originally envisioned the space as a daytime ca/social hub

for his tenants, but research indicated that today's budding Banksys

PUNTERS CAN LOCK LIPS WITH A

FRISK, OR SUBMIT TO ETHEL'S WISH

Clockwise from this image:

Pearl's at The Cat  Mutton