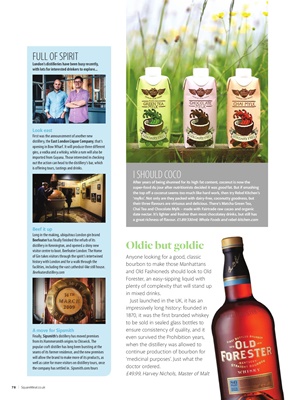 FULL OF SPIRITLondon's distilleries have been busy recently,

First was the announcement of another new

opening in Bow Wharf. It will produce three different

gins, a vodka and a whisky, while a rum will also be

out the action can head to the distillery's bar, which

is offering tours, tastings and drinks.

Beefeater has finally finished the refurb of its

distillery in Kennington, and opened a shiny new

of Gin takes visitors through the spirit's intertwined

history with London and for a walk through the

A move for Sipsmith

from its Hammersmith origins to Chiswick. The

popular craft distiller has long been bursting at the

seams of its former residence, and the new premises

will allow the brand to make more of its products, as

well as cater for more visitors on distillery tours, once

the company has settled in. sipsmith.com/tours

I SHOULD COCOAfter years of being shunned for its high fat content, coconut is now the

super-food du jour after nutritionists decided it was good fat. But if smashing

the top o a coconut seems too much like hard work, then try Rebel Kitchen's

'mylks'. Not only are they packed with dairy-free, coconutty goodness, but

date nectar. It's lighter and fresher than most chocolatey drinks, but still has

Anyone looking for a good, classic

bourbon to make those Manhattans

and Old Fashioneds should look to Old

Forester, an easy-sipping liquid with

plenty of complexity that will stand up

Just launched in the UK, it has an

1870, it was the first branded whiskey

to be sold in sealed glass bottles to

ensure consistency of quality, and it

even survived the Prohibition years,

when the distillery was allowed to

continue production of bourbon for

'medicinal purposes'. Just what the