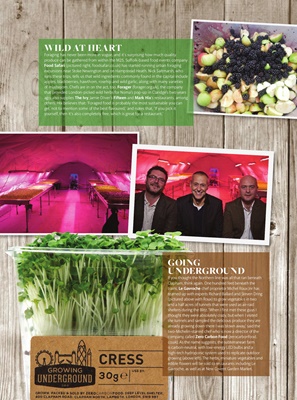 Foraging has never been more in vogue, and it's surprising how much quality

produce can be gathered from within the M25. Su olk-based food events company

excursions near Stoke Newington and on Hampstead Heath. Nick Saltmarsh, who

runs these trips, tells us that wild ingredients commonly found in the capital include

apples, blackberries, hawthorn, rosehip and wild garlic, along with many varieties

of mushroom. Chefs are in on the act, too. Forager (forager.org.uk), the company

ago, also supplies The Ivy, Jamie Oliver's Fifteen and Mark Hix's restaurants, among

others. Hix believes that: 'Foraged food is probably the most sustainable you can

get, not to mention some of the best  avoured,' and notes that, 'If you pick it

yourself, then it's also completely free, which is great for a restaurant.' GOING

If you thought the Northern line was all that ran beneath

Clapham, think again. One hundred feet beneath the

teamed up with experts Richard Ballard and Steven Dring

(pictured above with Roux) to grow vegetables in two

shelters during the Blitz. 'When I  rst met these guys I

thought they were absolutely crazy, but when I visited

the tunnels and sampled the delicious produce they are

already growing down there I was blown away,' said the

two-Michelin-starred chef who is now a director of the

co.uk). As the name suggests, the subterranean farm

is carbon-neutral, with low-energy LED bulbs and a

growing (above left). The herbs, miniature vegetables and

edible  owers will be sold to restaurants including Le

Gavroche, as well as at New Covent Garden Market.