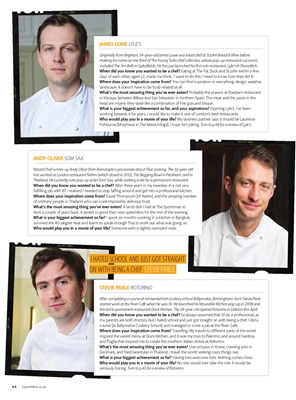 making his name as one third of The Young Turks chef collective, whose pop-up restaurant successes

included The Ten Bells in Spital elds. He has just launched his  rst solo restaurant, Lyle's in Shoreditch.

When did you know you wanted to be a chef? Eating at The Fat Duck and St John within a few

Where does your inspiration come from? You can  nd inspiration in everything: design, weather,

landscape. It doesn't have to be food-related at all.

What's the most amazing thing you've ever eaten? Probably the prawns at Etxebarri restaurant

in Vizcaya, between Bilbao and San Sebastian in northern Spain. The meat and the juices in the

head are insane, they taste like a combination of foie gras and bisque.

What is your biggest achievement so far, and your aspirations? Opening Lyle's. I've been

working towards it for years. I would like to make it one of London's best restaurants.

Who would play you in a movie of your life? My business partner says it should be Laurence

Fishburne [Morpheus in The Matrix trilogy]. I hope he's joking. Turn to p.46 for a review of Lyle's.

I HATED SCHOOL AND JUST GOT STRAIGHT

ON WITH BEING A CHEF STEVIE PARLE

MasterChef runner-up Andy Oliver from Barnstaple is passionate about Thai cooking. The 32-year-old

has worked at London restaurant Nahm (which closed in 2012), The Begging Bowl in Peckham, and in

Thailand. He currently runs pop-up series Som Saa, while seeking a site for a permanent restaurant.

When did you know you wanted to be a chef? After three years in my twenties in a not very

ful lling job with BT, I realised I needed to stop fa ng around and get into a professional kitchen.

Where does your inspiration come from? David Thompsom [of Nahm], and the amazing number

of ordinary people in Thailand who can cook impossibly delicious food.

What's the most amazing thing you've ever eaten? A lamb dish I had at The Sportsman in

Kent a couple of years back. It tasted so good that I was speechless for the rest of the evening.

What is your biggest achievement so far? I spent six months working in a kitchen in Bangkok,

survived the 40-degree heat and learnt to speak enough Thai to work out what was going on.

Who would play you in a movie of your life? Someone with a slightly oversized nose.

started work at the River Café when he was 16. He launched his Moveable Kitchen pop-up in 2008 and

this led to permanent restaurant Dock Kitchen. The 29-year-old opened Rotorino in Dalston this April.

When did you know you wanted to be a chef? I'd always assumed that I'd be a professional, as

my parents are both doctors, but I hated school and just got straight on with being a chef. I did a

course [at Ballymaloe Cookery School] and managed to score a job at the River Café.

Where does your inspiration come from? Travelling. My travels to di erent parts of the world

inspired the varied menu at Dock Kitchen, and it was my trips to Palermo, and around Sardinia

and Puglia that inspired me to create the southern Italian dishes at Rotorino.

What's the most amazing thing you've ever eaten? Live octopus in Korea, crawling ants in

Denmark, and fried tarantulas in Thailand. I travel the world seeking crazy things out.

What is your biggest achievement so far? Having two awesome kids. Nothing comes close.

Who would play you in a movie of your life? No one would ever take the role. It would be

seriously boring. Turn to p.43 for a review of Rotorino.