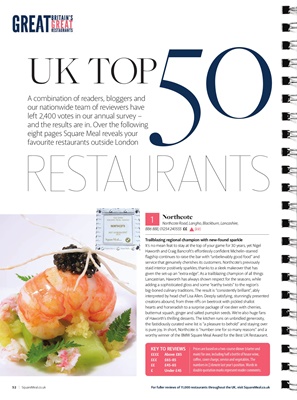 our nationwide team of reviewers have

and the results are in. Over the following

It's no mean feat to stay at the top of your game for 30 years, yet Nigel

­ agship continues to raise the bar with "unbelievably good food" and

staid interior positively sparkles, thanks to a sleek makeover that has

given the set-up an "extra edge". As a trailblazing champion of all things

Lancastrian, Haworth has always shown respect for the seasons, while

adding a sophisticated gloss and some "earthy twists" to the region's

hearts and horseradish to a surprise package of roe deer with cherries,

of Haworth's thrilling desserts. The kitchen runs on unbridled generosity,

is pure joy. In short, Northcote is "number one for so many reasons" and a

worthy winner of the BMW Square Meal Award for the Best UK Restaurant.

Prices are based on a two-course dinner (starter and

main) for one, including half a bottle of house wine,