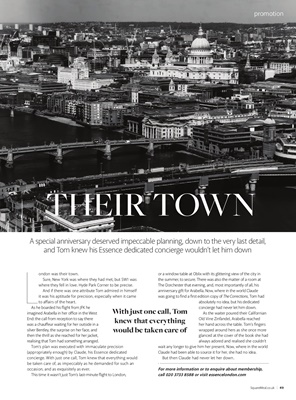 London was their town.

Sure, New York was where they had met, but SW1 was

where they fell in love. Hyde Park Corner to be precise.

And if there was one attribute Tom admired in himself

it was his aptitude for precision, especially when it came

to aairs of the heart.

As he boarded his ­ight from JFK he

imagined Arabella in her oce in the West

End: the call from reception to say there

was a chaueur waiting for her outside in a

silver Bentley, the surprise on her face, and

then the thrill as she reached for her jacket,

realising that Tom had something arranged.

concierge. With just one call, Tom knew that everything would

be taken care of, as impeccably as he demanded for such an

occasion, and as exquisitely as ever.

This time it wasn't just Tom's last-minute ­ight to London,

the summer, to secure. There was also the matter of a room at

The Dorchester that evening, and, most importantly of all, his

anniversary gift for Arabella. Now, where in the world Claude

was going to nd a rst edition copy of The Corrections, Tom had

absolutely no idea, but his dedicated

concierge had never let him down.

As the waiter poured their Californian

her hand across the table. Tom's ngers

wrapped around hers as she once more

glanced at the cover of the book she had

always adored and realised she couldn't

wait any longer to give him her present. Now, where in the world

Claude had been able to source it for her, she had no idea.

But then Claude had never let her down.

For more information or to enquire about membership,

A special anniversary deserved impeccable planning, down to the very last detail,

and Tom knew his Essence dedicated concierge wouldn't let him down

With just one call, Tom

would be taken care of