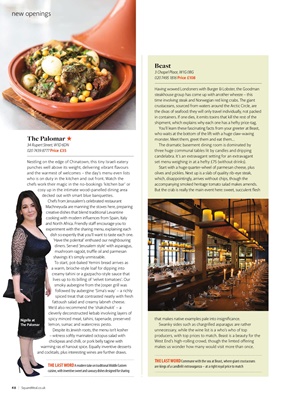 Nestling on the edge of Chinatown, this tiny Israeli eatery

and the warmest of welcomes - the day's menu even lists

who is on duty in the kitchen and out front. Watch the

chefs work their magic in the no-bookings 'kitchen bar' or

cosy up in the intimate wood-panelled dining area

decked out with smart blue banquettes.

and North Africa. Friendly sta encourage you to

experiment with the sharing menu, explaining each

dish so expertly that you'll want to taste each one.

'Have the polenta!' enthused our neighbouring

a warm, brioche-style loaf for dipping into

creamy tahini or a gazpacho-style sauce that

lives up to its billing of 'velvet tomatoes'. Our

smoky aubergine from the Josper grill was

We'd also recommend the 'shakshukit' - a

Despite its Jewish roots, the menu isn't kosher

chickpeas and chilli, or pork belly tagine with

and cocktails, plus interesting wines are further draws.

Having wowed Londoners with Burger  Lobster, the Goodman

steakhouse group has come up with another wheeze - this

crustaceans, sourced from waters around the Arctic Circle, are

the divas of seafood: they will only travel individually, not packed

in containers. If one dies, it emits toxins that kill the rest of the

shipment, which explains why each one has a hefty price-tag.

You'll learn these fascinating facts from your greeter at Beast,

monster. Meet them, greet them and eat them…

The dramatic basement dining room is dominated by

set menu weighing in at a hefty £75 (without drinks).

Start with a huge quarter-wheel of parmesan cheese, plus

olives and pickles. Next up is a slab of quality rib-eye steak,

which, disappointingly, arrives without chips, though the

But the crab is really the main event here: sweet, succulent �esh

Swanky sides such as chargrilled asparagus are rather

unnecessary, while the wine list is a who's who of top

producers, with top prices to match. Beast is a beauty for the

makes us wonder how many would visit more than once.

THE LAST WORD Commune with the sea at Beast, where giant crustaceans

THE LAST WORD A modern take on traditional Middle Eastern

cuisine, with inventive sweet and savoury dishes designed for sharing