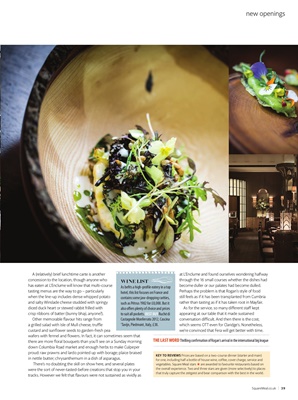 A (relatively) brief lunchtime carte is another

concession to the location, though anyone who

has eaten at L'Enclume will know that multi-course

tasting menus are the way to go - particularly

Other memorable avour hits range from

a grilled salad with Isle of Mull cheese, true

wafers with fennel and owers. In fact, it can sometimes seem that

down Columbia Road market and enough herbs to make Culpeper

in nettle butter; chrysanthemum in a dish of asparagus.

There's no doubting the skill on show here, and several plates

tracks. However we felt that avours were not sustained as vividly as

at L'Enclume and found ourselves wondering halfway

through the 16 small courses whether the dishes had

Perhaps the problem is that Rogan's style of food

still feels as if it has been transplanted from Cumbria

rather than tasting as if it has taken root in Mayfair.

As for the service, so many dierent sta kept

appearing at our table that it made sustained

conversation dicult. And then there is the cost,

which seems OTT even for Claridge's. Nonetheless,

we're convinced that Fera will get better with time.