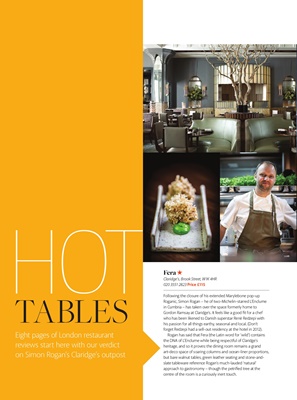 reviews start here with our verdict

Following the closure of his extended Marylebone pop-up

in Cumbria - has taken over the space formerly home to

Gordon Ramsay at Claridge's. It feels like a good t for a chef

who has been likened to Danish superstar René Redzepi with

his passion for all things earthy, seasonal and local. (Don't

forget Redzepi had a sell-out residency at the hotel in 2012).

Rogan has said that Fera (the Latin word for 'wild') contains

the DNA of L'Enclume while being respectful of Claridge's

heritage, and so it proves: the dining room remains a grand

approach to gastronomy - though the petried tree at the

centre of the room is a curiously inert touch.