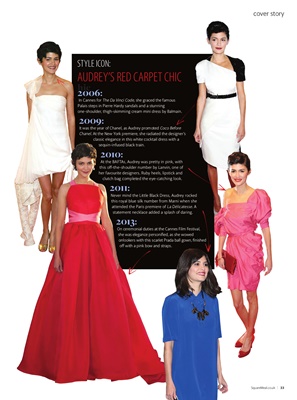 2006: In Cannes for The Da Vinci Code, she graced the famous

Palais steps in Pierre Hardy sandals and a stunning

2009: It was the year of Chanel, as Audrey promoted Coco Before

Chanel. At the New York premiere, she radiated the designer's

classic elegance in this white cocktail dress with a

this o-the-shoulder number by Lanvin, one of

this royal blue silk number from Marni when she

attended the Paris premiere of La Délicatesse. A

2013: On ceremonial duties at the Cannes Film Festival,

she was elegance personi§ed, as she wowed

o with a pink bow and straps.