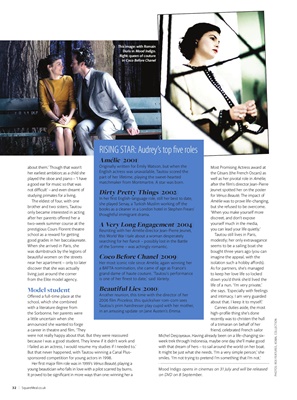 about them.' Though that wasn't

her earliest ambition; as a child she

played the oboe and piano - 'I have

a good ear for music so that was

not dicult' - and even dreamt of

studying primates for a living.

The eldest of four, with one

after her parents oered her a

two-week summer course at the

school as a reward for getting

good grades in her baccalaureate.

When she arrived in Paris, she

was dumbstruck by the legions of

beautiful women on the streets

near her apartment - only to later

discover that she was actually

living just around the corner

from the Elite model agency.

Oered a full-time place at the

school, which she combined

with a literature degree from

the Sorbonne, her parents were

a little uncertain when she

announced she wanted to forge

a career in theatre and §lm. 'They

were not really happy about that. But they were reassured

because I was a good student. They knew if it didn't work and

I failed as an actress, I would resume my studies if I needed to.'

But that never happened, with Tautou winning a Canal Plussponsored

competition for young actors in 1998.

young beautician who falls in love with a pilot scarred by burns.

It proved to be signi§cant in more ways than one: winning her a

Most Promising Actress award at

the Césars (the French Oscars) as

well as her pivotal role in Amélie,

after the §lm's director Jean-Pierre

Jeunet spotted her on the poster

for Vénus Beauté. The impact of

Amélie was to prove life-changing,

but she refused to be overcome.

'When you make yourself more

yourself much in the media,

you can lead your life quietly.'

modestly; her only extravagance

seems to be a sailing boat she

bought three years ago (you can

imagine the appeal, with the

isolation such a hobby aords).

As for partners, she's managed

to keep her love life so locked

down you'd think she'd lived the

she says. 'Especially with feelings

and intimacy. I am very guarded

about that. I keep it to myself.'

Cannes duties aside, the most

recently was to christen the hull

of a trimaran on behalf of her

with that dream of hers - to sail around the world on her boat.

It might be just what she needs. 'I'm a very simple person,' she

smiles. 'I'm not trying to pretend I'm something that I'm not.'

on DVD on 8 September.

Originally written for Emily Watson, but when the

part of her lifetime, playing the sweet-hearted

matchmaker from Montmartre. A star was born.

In her §rst English-language role, still her best to date,

she played Senay, a Turkish Muslim working o the

books as a cleaner in a London hotel in Stephen Frears'

this World War I tale about a woman desperately

searching for her §ancé - possibly lost in the Battle

of the Somme - was achingly romantic.

Her most iconic role since Amélie, again winning her

a BAFTA nomination, she came of age as France's

is one of her §nest to date,' said Variety.

Another reunion, this time with the director of her

in an amusing update on Jane Austen's Emma.

This image: with Romain

in Coco Before Chanel