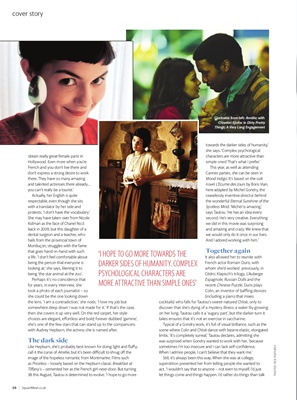 Hollywood. Even more when you're

French and you don't live there and

there. They have so many amazing

and talented actresses there already…

you can't really be a tourist.'

Actually, her English is quite

respectable, even though she sits

with a translator by her side and

protests, 'I don't have the vocabulary.'

She may have taken over from Nicole

Kidman as the face of Chanel No.5

dental surgeon and a teacher, who

hails from the provincial town of

Montluçon, struggles with the fame

that goes hand-in-hand with such

a life. 'I don't feel comfortable about

being the person that everyone is

looking at,' she says, likening it to

being 'the star animal at the zoo'.

Perhaps it's no coincidence that

for years, in every interview, she

took a photo of each journalist - so

she could be the one looking down

the lens. 'I am a contradiction,' she nods. 'I love my job but

somewhere deep down I was not made for it.' If that's the case,

then she covers it up very well. On the red carpet, her style

with Audrey Hepburn, the actress she is named after.

call it the curse of Amélie, but it's been dicult to shrug o the

image of the hopeless romantic from Montmartre. Films such

as Priceless - loosely based on the Hepburn classic Breakfast at

Tiany's - cemented her as the French girl-next-door. But turning

38 this August, Tautou is determined to evolve. 'I hope to go more

towards the darker sides of humanity,'

characters are more attractive than

simple ones! That's what I prefer.'

This year, as well as attending

Cannes parties, she can be seen in

Mood Indigo. It's based on the cult

here adapted by Michel Gondry, the

the wonderful Eternal Sunshine of the

says Tautou. 'He has an idea every

we did in this movie was surprising

and amazing and crazy. We knew that

we would only do it once in our lives.

And I adored working with him.'

It also allowed her to reunite with

whom she'd worked previously, in

Espagnole, Russian Dolls and the

Colin, an inventor of ba£ing devices

(including a piano that mixes

cocktails) who falls for Tautou's sweet-natured Chloé, only to

discover that she's dying of a mystery illness: a water lily growing

on her lung. Tautou calls it a 'sugary part', but the darker turn it

takes ensures that it's not an exercise in saccharine.

Typical of a Gondry work, it's full of visual brilliance, such as the

scene where Colin and Chloé dance with bizarre elastic, elongated

was surprised when Gondry wanted to work with her, 'because

sometimes I'm too insecure and I can lack self-con§dence.

When I admire people, I can't believe that they want me.'

Still, it's always been this way. When she was at college,

superstition prevented her from telling people she wanted to

act. 'I wouldn't say that to anyone - not even to myself. I'd just

let things come and things happen. I'd rather do things than talk

'I HOPE TO GO MORE TOWARDS THE

MORE ATTRACTIVE THAN SIMPLE ONES'

Clockwise from left: Amélie; with