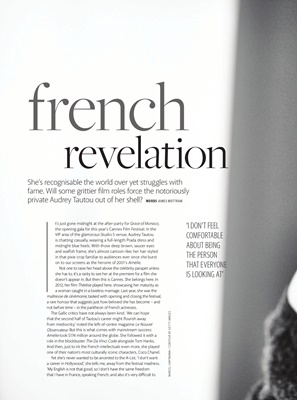 t's just gone midnight at the after-party for Grace of Monaco,

the opening gala for this year's Cannes Film Festival. In the

is chatting casually, wearing a full-length Prada dress and

in that pixie crop familiar to audiences ever since she burst

on to our screens as the heroine of 2001's Amélie.

Not one to raise her head above the celebrity parapet unless

she has to, it's a rarity to see her at the premiere for a lm she

doesn't appear in. But then this is Cannes. She belongs here. In

2012, her lm Thérèse played here, showcasing her maturity as

a woman caught in a loveless marriage. Last year, she was the

maîtresse de cérémonie, tasked with opening and closing the festival,

not before time - in the pantheon of French actresses.

The Gallic critics have not always been kind. 'We can hope

that the second half of Tautou's career might ourish away

Observateur. But this is what comes with mainstream success:

Amélie took $174 million around the globe. She followed it with a

role in the blockbuster The Da Vinci Code alongside Tom Hanks.

And then, just to irk the French intellectuals even more, she played

one of their nation's most culturally iconic characters, Coco Chanel.

Yet she's never wanted to be anointed to the A-List. 'I don't want

a career in Hollywood,' she tells me, away from the festival madness.

'My English is not that good, so I don't have the same freedom

that I have in France, speaking French, and also it's very di¡cult to

She's recognisable the world over yet struggles with

fame. Will some grittier �lm roles force the notoriously

private Audrey Tautou out of her shell? WORDS JAMES MOTTRAM 'I DON'T FEEL