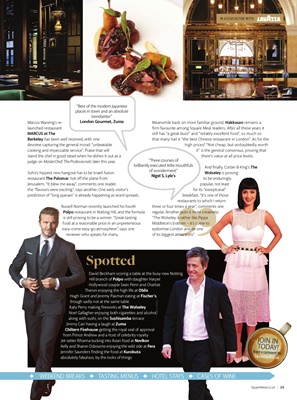 Meanwhile back on more familiar ground, Hakkasan remains a

 rm favourite among Square Meal readers. After all these years it

still has "a great buzz" and "reliably excellent food", so much so

that many hail it "the best Chinese restaurant in London". As for the

high prices? "Not cheap, but undoubtedly worth

it" is the general consensus, proving that

there's value at all price levels.

And  nally, Corbin © King's The

breakfast. "It's one of those

restaurants to which I return

three or four times a year", comments one

regular. Another puts it more creatively:

Middleton's bottom - it's come to

epitomise London and be one

of its biggest attractions".

Berkeley has been well received, with one

cooking and impeccable service". Praise that will

judge on MasterChef: The Professionals later this year.

Soho's hippest new hangout has to be Israeli fusion

restaurant The Palomar, hot o« the plane from

Jerusalem. "It blew me away", comments one reader,

the "¬ avours were exciting", says another. One early visitor's

prediction of "long queues" is already happening as word spreads.

Polpo restaurant in Notting Hill, and the formula

is still proving to be a winner. "Great-tasting

food at a reasonable price in an unpretentious

reviewer who speaks for many.

"Best of the modern Japanese

places in town and an absolute

David Beckham scoring a table at the busy new Notting

though sadly not at the same table

along with sushi, on the Sushisamba terrace

Jimmy Carr having a laugh at Zuma

Chiltern Firehouse getting the royal seal of approval

from Prince Andrew and a host of celebrity royalty

Kelly and Sharon Osbourne enjoying the wild side at Fera

absolutely fabulous, by the looks of things