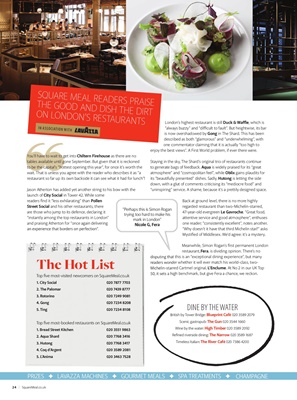 London's highest restaurant is still Duck � Wa� e, which is

"always buzzy" and "di� cult to fault". But heightwise, its bar

is now overshadowed by Gong in The Shard. This has been

described as both "glamorous" and "underwhelming", with

one commentator claiming that it is actually "too high to

enjoy the best views". A First World problem, if ever there were.

Staying in the sky, The Shard's original trio of restaurants continue

to generate bags of feedback. Aqua is widely praised for its "great

atmosphere" and "cosmopolitan feel", while Oblix gains plaudits for

its "beautifully presented" dishes. Sadly, Hutong is letting the side

down, with a glut of comments criticising its "mediocre food" and

"uninspiring" service. A shame, because it's a prettily designed space.

Back at ground level, there is no more highly

one reader; "consistently excellent", notes another.

"Why doesn't it have that third Michelin star?" asks

Mysti ed of Middlesex. We'd agree: it's a mystery.

disputing that this is an "exceptional dining experience", but many

readers wonder whether it will ever match his world-class, twoMichelin-starred

Cartmel original, L'Enclume. At No 2 in our UK Top

50, it sets a high benchmark, but give Fera a chance, we reckon.

tables available until gone September. But given that it is reckoned

to be the capital's "hottest opening this year", for once it's worth the

wait. That is unless you agree with the reader who describes it as "a

restaurant so far up its own backside it can see what it had for lunch"!

launch of City Social in Tower 42. While some

Street Social and his other restaurants, there

are those who jump to its defence, declaring it

"instantly among the top restaurants in London"

and praising Atherton for "once again delivering

an experience that borders on perfection".

"Perhaps this is Simon Rogan

trying too hard to make his

DINE BY THE WATER

disputing that this is an "exceptional dining experience", but many

readers wonder whether it will ever match his world-class, twoMichelin-starred

50, it sets a high benchmark, but give Fera a chance, we reckon.

an experience that borders on perfection".

THE GOOD AND DISH THE DIRT