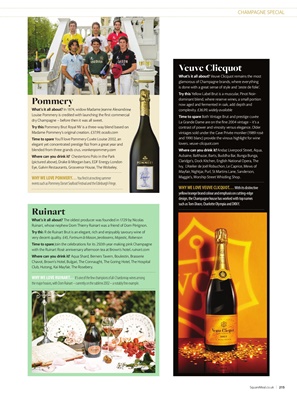 What's it all about? Veuve Clicquot remains the most

glamorous of Champagne brands, where everything

is done with a great sense of style and 'zeste de folie'.

Try this Yellow Label Brut is a muscular, Pinot Noirdominant

now aged and fermented in oak, add depth and

Time to spare Both Vintage Brut and prestige cuvée

contrast of power and vinosity versus elegance. Older

and 1990 blanc) provide the vinous highlight for wine

Where can you drink it? Andaz Liverpool Street, Aqua,

WHY WE LOVE VEUVE CLICQUOT… With its distinctive

design, the Champagne house has worked with top names

such as Tom Dixon, Charlotte Olympia and DKNY.

What's it all about? In 1874, widow Madame Jeanne Alexandrine

Louise Pommery is credited with launching the  rst commercial

dry Champagne - before then it was all sweet.

elegant yet concentrated prestige  zz from a great year and

Where can you drink it?  Chestertons Polo in the Park

WHY WE LOVE POMMERY… You � nd it at exciting summer

events such as Pommery Dorset Seafood Festival and the Edinburgh Fringe.

What's it all about? The oldest producer was founded in 1729 by Nicolas

Ruinart, whose nephew Dom Thierry Ruinart was a friend of Dom Pérignon.

Try this R de Ruinart Brut is an elegant, rich and enjoyably savoury wine of

Where can you drink it? Aqua Shard, Berners Tavern, Boulestin, Brasserie

the major houses, with Dom Ruinart - currently on the sublime 2002 - a notably � ne example.

Louise Pommery is credited with launching the  rst commercial

Pommery Brut Royal NV is a three-way blend based on