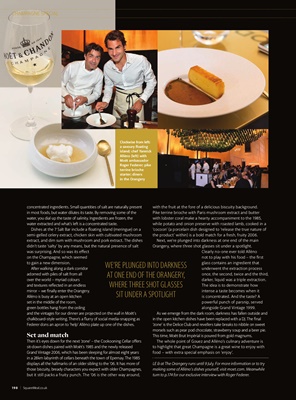 in most foods, but water dilutes its taste. By removing some of the

water, you dial up the taste of salinity. Ingredients are frozen, the

water extracted and what's left is a concentrated taste.

extract, and dim sum with mushroom and pork extract. The dishes

didn't taste 'salty' by any means, but the natural presence of salt

was surprising. And so was its eect

on the Champagne, which seemed

to gain a new dimension.

After walking along a dark corridor

adorned with piles of salt from all

over the world - myriad colours

and textures reected in an endless

mirror - we nally enter the Orangery.

Alléno is busy at an open kitchen

set in the middle of the room,

green bottles hang from the ceiling

chalkboard-style writing. There's a urry of social media-snapping as

Federer dons an apron to 'help' Alléno plate up one of the dishes.

sit-down dishes paired with Moët's 1985 and the newly released

Grand Vintage 2006, which has been sleeping for almost eight years

in a 28km labyrinth of cellars beneath the town of Epernay. The 1985

displays all the hallmarks of an older sibling to the '06. It has more of

those biscuity, bready characters you expect with older Champagnes,

but it still packs a fruity punch. The '06 is the other way around,

with the fruit at the fore of a delicious biscuity background.

with lobster coral make a hearty accompaniment to the 1985,

while potato and onion preserve with roasted lamb, cooked in a

'cocoon' (a porcelain dish designed to 'release the true nature of

Next, we're plunged into darkness at one end of the main

Orangery, where three shot glasses sit under a spotlight.

not to play with his food - the rst

glass contains an ingredient that

once, the second, twice and the third,

darker, liquid was a triple extraction.

The idea is to demonstrate how

intense a taste becomes when it

is concentrated. And the taste? A

As we emerge from the dark room, darkness has fallen outside and

in the open kitchen dishes have been replaced with a DJ. The nal

morsels such as pear pod chocolate, strawberry soup and a beer pie.

This time, Moët Brut Impérial is poured from gold magnums.

The whole point of Gouez and Alléno's culinary adventure is

LE � at The Orangery runs until 9 July. For more information or to try

turn to p.174 for our exclusive interview with Roger Federer.

AT ONE END OF THE ORANGERY,

SIT UNDER A SPOTLIGHT