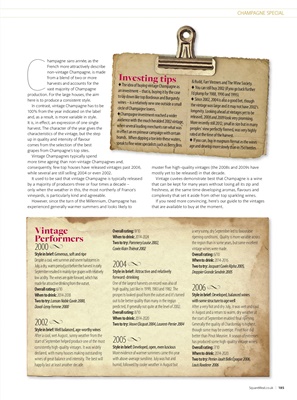 Despite a cool, wet summer and severe hailstorms in

July, a dry, warm period just before the harvest in early

low acidity. The wines are quite forward, which has

made for attractive drinking from the outset.

After a cool, wet August, sunny weather from the

start of September helped produce one of the most

consistently high-quality vintages. It was widely

declared, with many houses making outstanding

wines of great balance and intensity. The best will

happily last at least another decade.

Champagne sans année, as the

non-vintage Champagne, is made

from a blend of two or more

harvests and accounts for the

production. For the large houses, the aim

here is to produce a consistent style.

In contrast, vintage Champagne has to be

100% from the year indicated on the label

and, as a result, is more variable in style.

It is, in e ect, an expression of one single

harvest. The character of the year gives the

characteristics of the vintage, but the step

up in quality and intensity of   avour

comes from the selection of the best

It used to be said that vintage Champagne is typically released

by a majority of producers three or four times a decade -

only when the weather in this, the most northerly of France's

vineyards, is particularly kind and agreeable.

However, since the turn of the Millennium, Champagne has

2004 jStyle in brief: Attractive and relatively

One of the largest harvests on record was also of

prospects looked good from the outset and it's turned

out to be better quality than many in the region

predicted, if generally not quite at the level of 2002.

with above-average sunshine. July was hot and

humid, followed by cooler weather in August but

the region than in some years, but some excellent

vintage wines were made.

with some structure to age well

After a very hot and dry July, it was wet and cool

in August and a return to warm, dry weather at

Generally the quality of Chardonnay is highest,

though some may be overripe. Pinot Noir did

better than Pinot Meunier. A season of extremes

has produced some high-quality vintage wines.

mostly yet to be released) in that decade.

Vintage cuvées demonstrate best that Champagne is a wine

freshness, at the same time developing aromas,   avours and

complexity that set it aside from other top sparkling wines.

If you need more convincing, here's our guide to the vintages

that are available to buy at the moment.

The idea of buying vintage Champagne as

an investment - that is, buying it by the case

wines - is a relatively new one outside a small

audience with the much heralded 2002 vintage,

when several leading merchants ran what was

in e� ect an en primeur campaign with certain

brands. When dipping a toe into these waters,

speak to � ne wine specialists such as Berry Bros

the vintage was large and it may not have 2002's

longevity. Looking ahead at vintages yet to be

More recently still 2012, small in size but in many

rated at the time of the harvest.

If you can, buy in magnum format as the wines

age and develop more slowly than in 75cl bottles.