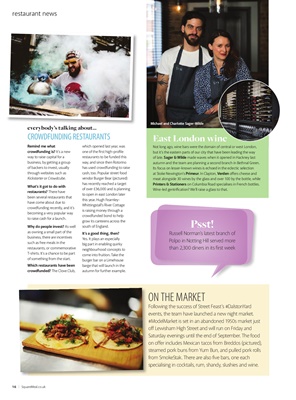 crowdfunding is? It's a new

way to raise capital for a

business, by getting a group

of backers to invest, usually

through websites such as

What's it got to do with

been several restaurants that

have come about due to

crowdfunding recently, and it's

to raise cash for a launch.

Why do people invest? As well

as owning a small part of the

business, there are incentives

such as free meals in the

T-shirts. It's a chance to be part

of something from the start.

Which restaurants have been

which opened last year, was

restaurants to be funded this

way, and since then Rotorino

has used crowdfunding to raise

has recently reached a target

to open in east London later

is raising money through a

grow its canteens across the

It's a good thing, then?

Yes. It plays an especially

come into fruition. Take the

burger bar on a Limehouse

barge that will launch in the

Not long ago, wine bars were the domain of central or west London,

of late. Sager  Wilde made waves when it opened in Hackney last

autumn and the team are planning a second branch in Bethnal Green.

meat alongside 30 wines by the glass and over 100 by the bottle, while

events, the team have launched a new night market.

#ModelMarket is set in an abandoned 1950s market just

off Lewisham High Street and will run on Friday and

Saturday evenings until the end of September. The food

from SmokeStak. There are also five bars, one each