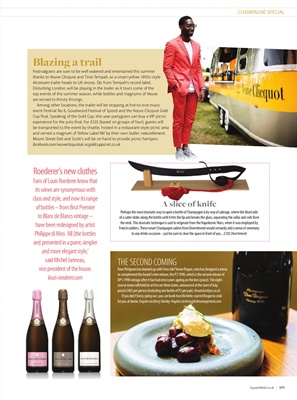 Festivalgoers are sure to be well watered and entertained this summer

thanks to Veuve Clicquot and Tinie Tempah, as a smart yellow 1950s-style

Disturbing London, will be playing in the trailer as it tours some of the

top events of the summer season, while bottles and magnums of Veuve

are served to thirsty throngs.

Among other locations, the trailer will be stopping at hot-to-trot music

event Festival No 6, Goodwood Festival of Speed and the Veuve Clicquot Gold

Cup  nal. Speaking of the Gold Cup, this year partygoers can buy a VIP picnic

experience for the polo  nal. For £125 (based on groups of four), guests will

be transported to the event by shuttle, hosted in a restaurant-style picnic area

and served a magnum of Yellow Label NV by their own butler, naturellement.

Mount Street Deli and Scott's will be on hand to provide picnic hampers.

A slice of knife

Perhaps the most dramatic way to open a bottle of Champagne is by way of sabrage, where the blunt side

of a sabre slides along the bottle until it hits the lip and breaks the glass, separating the collar and cork from

the neck. This dramatic technique is said to originate from the Napoleonic Wars, when it was employed by

French soldiers. These smart Champagne sabres from Divertimenti would certainly add a sense of ceremony

to any drinks occasion - just be sure to clear the space in front of you... £120; Divertimenti

Fans of Louis Roederer know that

its wines are synonymous with

class and style, and now its range

of bottles - from Brut Premier

have been redesigned by artist

Philippe di Meo. 'All [the bottles

are] presented in a purer, simpler

vice president of the house.

A slice of knife

Dom Pérignon has teamed up with Fera chef Simon Rogan, who has designed a menu

to complement the brand's new release, the P2 1998, which is the second release of

DP's 1998 vintage after it has hadkirsty@kshmanagement.comhe lees (yeast). The eightcourse

menu will held be at Fera on three dates, announced at the start of July,

priced £405 per person (including one bottle of P2 per pair). feraatclaridges.co.uk

If you don't fancy going out, you can book two Michelin-starred Rogan to cook

for you at home. Enquire via Kirsty Stanley-Hughes at kirsty@kshmanagement.com