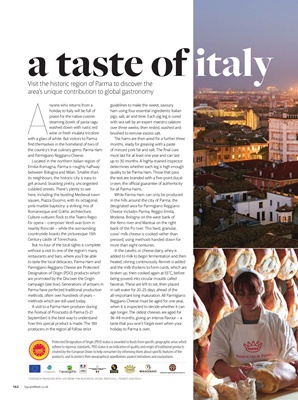 Anyone who returns from a

holiday to Italy will be full of

praise for the native cuisine:

washed down with rustic red

with a glass of white. But visitors to Parma

 nd themselves in the homeland of two of

Located in the northern Italian region of

between Bologna and Milan. Smaller than

its neighbours, the historic city is easy to

get around, boasting pretty, uncongested

here, including the bustling Medieval town

square, Piazza Duomo, with its octagonal,

pink-marble baptistry: a striking mix of

for opera - composer Verdi was born in

nearby Roncole - while the surrounding

But no tour of the local sights is complete

without a visit to one of the region's many

restaurants and bars, where you'll be able

to taste the local delicacies. Parma Ham and

Designation of Origin (PDO) products which

are promoted by the Discover the Origin

methods, often over hundreds of years -

methods which are still used today.

A visit to a Parma Ham producer during

the Festival of Prosciutto di Parma (5-21

September) is the best way to understand

how this special product is made. The 189

guidelines to make the sweet, savoury

pigs, salt, air and time. Each pig leg is cured

with sea salt by an expert maestro salatore

over three weeks, then rested, washed and

The hams are then aired for a further three

months, ready for greasing with a paste

of minced pork fat and salt. The  nal cure

must last for at least one year and can last

up to 30 months. A highly-trained inspector

determines whether each leg is high enough

quality to be Parma Ham. Those that pass

for all Parma Hams.

While Parma Ham can only be produced

in the hills around the city of Parma, the

Modena, Bologna on the west bank of

the Reno river and Mantua on the right

bank of the Po river. This hard, granular,

cows' milk cheese is cooked rather than

pressed, using methods handed down for

In the casello, or cheese dairy, whey is

added to milk to begin fermentation and then

and the milk thickens to form curds, which are

broken up, then cooked again at 55°C, before

being poured into circular moulds called

fasceras. These are left to set, then placed

Reggiano Cheese must be aged for one year,

when it is inspected to decide whether it can

age longer. The oldest cheeses are aged for

taste that you won't forget even when your

holiday to Parma is over.

a taste of italy

Visit the historic region of Parma to discover the

adhere to rigorous standards. PDO status is an indication of quality and origin of traditional products

products, and to protect their geographical appellations against imitations and usurpations.