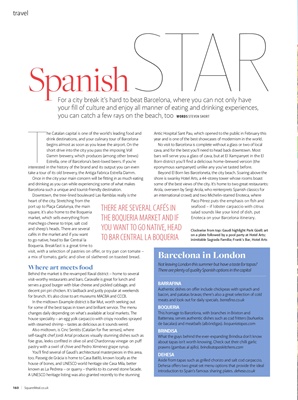 he Catalan capital is one of the world's leading food and

drink destinations, and your culinary tour of Barcelona

begins almost as soon as you leave the airport. On the

short drive into the city you pass the imposing Voll

Damm brewery, which produces (among other brews)

Estrella, one of Barcelona's best-loved beers. If you're

take a tour of its old brewery, the Antiga Fabrica Estrella Damm.

and drinking as you can while experiencing some of what makes

Barcelona such a unique and tourist-friendly destination.

Downtown, the tree-lined boulevard Las Ramblas really is the

heart of the city. Stretching from the

port up to Plaça Catalunya, the main

square, it's also home to the Boqueria

market, which sells everything from

and sheep's heads. There are several

cafés in the market and if you want

Boqueria. Breakfast is a great time to

visit, with a selection of pastries on oer, or try pan con tomate -

a mix of tomato, garlic and olive oil slathered on toasted bread.

Behind the market is the revamped Raval district - home to several

visit-worthy restaurants and bars. Caravalle is great for lunch and

serves a good burger with blue cheese and pickled cabbage, and

for brunch. It's also close to art museums MACBA and CCCB.

In the midtown Eixample district is Bar Mut, worth seeking out

for some of the best tapas in town and brilliant service. The menu

changes daily depending on what's available at local markets. The

with steamed shrimp - tastes as delicious as it sounds weird.

Also midtown, is Cinc Sentits (Catalan for ve senses), where

pastry with a swirl of chive and Pedro Ximénez grape syrup.

You'll nd several of Gaudí's architectural masterpieces in this area,

too. Passeig de Gràcia is home to Casa Batlló, known locally as the

known as La Pedrera - or quarry - thanks to its curved stone facade.

A UNESCO heritage listing was also granted recently to the stunning

For a city break it's hard to beat Barcelona, where you can not only have

your �ll of culture and enjoy all manner of eating and drinking experiences,

you can catch a few rays on the beach, too WORDS STEVEN SHORT

Not leaving London this summer but have a taste for tapas?

There are plenty of quality Spanish options in the capital

Authentic dishes on oer include chickpeas with spinach and

meats and look out for daily specials. barra�na.co.uk

This homage to Barcelona, with branches in Brixton and

What the guys behind the ever-expanding Brindisa don't know

about tapas isn't worth knowing. Check out their chilli garlic

Aside from tapas such as grilled chorizo and salt cod carpaccio,

STARAntic Hospital Sant Pau, which opened to the public in February this

year and is one of the best showcases of modernism in the world.

cava, and for the best you'll need to head back downtown. Most

bars will serve you a glass of cava, but at El Xampanyet in the El

eponymous xampanyet) unlike any you've tasted before.

Beyond El Born lies Barceloneta, the city beach. Soaring above the

some of the best views of the city. It's home to two great restaurants:

Arola, overseen by Sergi Arola, who reinterprets Spanish classics for

an international crowd; and two Michelin-starred Enoteca, where

Paco Pérez puts the emphasis on sh and

seafood - if lobster carpaccio with citrus

Enoteca on your Barcelona itinerary.

THERE ARE SEVERAL CAFÉS IN

THE BOQUERIA MARKET AND IF

YOU WANT TO GO NATIVE, HEAD

on a plate followed by a pool party at Hotel Arts;