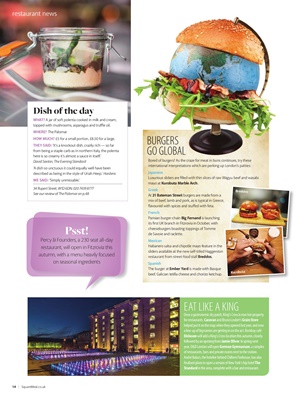 WHAT? A jar of soft polenta cooked in milk and cream,

THEY SAID: 'It's a knockout dish, crazily rich - so far

from being a staple carb as in northern Italy, the polenta

here is so creamy it's almost a sauce in itself.'

'A dish so unctuous it could equally well have been

described as being in the style of Uriah Heep.' Hardens

See our review of The Palomar on p.48

restaurant, will open in Fitzrovia this

autumn, with a menu heavily focused

Bored of burgers? As the craze for meat in buns continues, try these

international interpretations which are perking up London's patties:

At 21 Bateman Street burgers are made from a

mix of beef, lamb and pork, as is typical in Greece,

its  rst UK branch in Fitzrovia in October, with

Habanero salsa and chipotle mayo feature in the

The burger at Ember Yard is made with Basque

helped put it on the map when they opened last year, and now

a line-up of big names are getting in on the act. Bombay café

Dishoom will add a King's Cross location this autumn, closely

followed by an opening from Jamie Oliver. In spring next

of restaurants, bars and private rooms next to the station.

André Balazs, the hotelier behind Chiltern Firehouse, has also

Standard in the area, complete with a bar and restaurant.