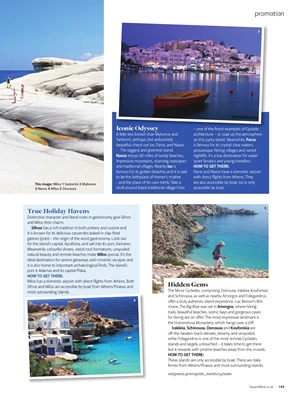 and Schinousa, as well as nearby Amorgos and Folegandros,

movie The Big Blue was set in Amorgos, where hiking

for diving are on o er. The most impressive landmark is

the Hozoviotissa Monastery, which hangs over a cli .

while Folegandros is one of the most remote Cyclades

islands and largely untouched - it takes time to get there

but it rewards with pristine beaches away from the crowds.

These islands are only accessible by boat. There are daily

ferries from Athens/Piraeus and most surrounding islands.

A little less known than Mykonos and

The biggest and greenest island,

and traditional villages. Nearby Ios is

famous for its golden beaches and it is said

to be the birthplace of Homer's mother

- and the place of his own tomb. Take a

- one of the  nest examples of Cycladic

architecture - or soak up the atmosphere

on this party island. Meanwhile, Paros

is famous for its crystal-clear waters,

nightlife. It's a top destination for water

Paros and Naxos have a domestic airport

with direct  ights from Athens. They

are also accessible by boat. Ios is only

Distinctive character and literal roots in gastronomy give Sifnos

and Milos their charm.

Sifnos has a rich tradition in both pottery and cuisine and

it is known for its delicious casseroles baked in clay- red

gástres (pots) - the origin of the word gastronomy. Look out

for the island's capital, Apollonia, and sail into its port, Kamares.

natural beauty and remote beaches make Milos special. It's the

ideal destination for serene getaways and romantic escapes and

it is also home to important archaeological  nds. The island's

port is Adamas and its capital Plaka.

Milos has a domestic airport with direct  ights from Athens. Both

Sifnos and Milos are accessible by boat from Athens/Piraeus and

Iconic Odyssey - one of the  nest examples of Cycladic