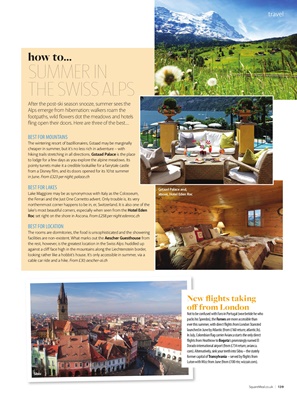 The wintering resort of bazillionaires, Gstaad may be marginally

cheaper in summer, but it's no less rich in adventure - with

hiking trails stretching in all directions. Gstaad Palace is the place

to lodge for a few days as you explore the alpine meadows. Its

pointy turrets make it a credible lookalike for a fairytale castle

from a Disney  lm, and its doors opened for its 101st summer

Lake Maggiore may be as synonymous with Italy as the Colosseum,

the Ferrari and the Just One Cornetto advert. Only trouble is, its very

northernmost corner happens to be in, er, Switzerland. It is also one of the

lake's most beautiful corners, especially when seen from the Hotel Eden

Roc set right on the shore in Ascona. From £258 per night edenroc.ch

The rooms are dormitories, the food is unsophisticated and the showering

facilities are non-existent. What marks out the Aescher Guesthouse from

the rest, however, is the greatest location in the Swiss Alps: huddled up

against a cli face high in the mountains along the Liechtenstein border,

looking rather like a hobbit's house. It's only accessible in summer, via a

cable car ride and a hike. From £30; aescher-ai.ch

packs his Speedos), the Faroes are more accessible than

ever this summer, with direct flights from London Stansted

launched in June by Atlantic (from £160 return; atlantic.fo).

In July, Colombian flag carrier Avianca starts the only direct

com). Alternatively, sink your teeth into Sibiu - the stately

former capital of Transylvania - served by flights from

After the post-ski season snooze, summer sees the

 ing open their doors. Here are three of the best…