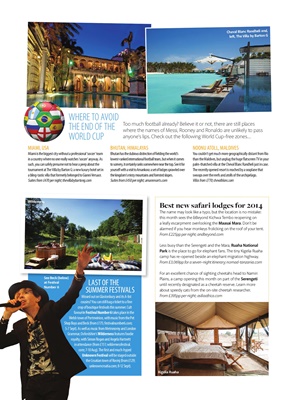 Miami is the biggest city without a professional 'soccer' team

in a country where no one really watches 'soccer' anyway. As

such, you can safely presume not to hear a peep about the

tournament at The Villa by Barton G: a new luxury hotel set in

a bling-tastic villa that formerly belonged to Gianni Versace.

Suites from £470 per night; thevillabybartong.com

Bhutan has the dubious distinction of fielding the world's

lowest-ranked international football team, but when it comes

to scenery, it certainly ranks somewhere near the top. See it for

yourself with a visit to Amankora: a set of lodges sprawled over

Suites from £450 per night; amanresorts.com

You couldn't get much more geographically distant from Rio

than the Maldives, but unplug the huge flatscreen TV in your

palm-thatched villa at the Cheval Blanc Randheli just in case.

The recently opened resort is reached by a seaplane that

swoops over the reefs and atolls of the archipelago.

Missed out on Glastonbury and its A-list

cousins? You can still bag a ticket to a fine

Welsh town of Portmeirion, with music from the Pet

Shop Boys and Beck (from £175; festivalnumber6.com;

5-7 Sept). As well as music from Metronomy and London

Unknown Festival will be staged outside

The name may look like a typo, but the location is no mistake:

this month sees the Beyond Kichwa Tembo reopening on

a leafy escarpment overlooking the Maasai Mara. Don't be

alarmed if you hear monkeys frolicking on the roof of your tent.

From £225pp per night; andbeyond.com

Less busy than the Serengeti and the Mara, Ruaha National

Park is the place to go for elephant fans. The tiny Kigelia Ruaha

camp has re-opened beside an elephant migration highway.

From £3,069pp for a seven-night itinerary; nomad-tanzania.com

For an excellent chance of sighting cheetahs head to Namiri

Plains, a camp opening this month on part of the Serengeti

until recently designated as a cheetah reserve. Learn more

about speedy cats from the on-site cheetah researcher.

From £395pp per night; asiliaafrica.com

THE END OF THE

Too much football already? Believe it or not, there are still places

where the names of Messi, Rooney and Ronaldo are unlikely to pass

left, The Villa by Barton G