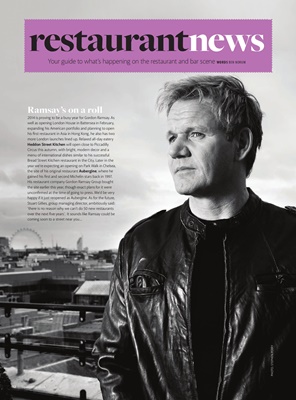 Ramsay's on a roll

2014 is proving to be a busy year for Gordon Ramsay. As

well as opening London House in Battersea in February,

expanding his American portfolio and planning to open

his rst restaurant in Asia in Hong Kong, he also has two

Circus this autumn, with bright, modern decor and a

menu of international dishes similar to his successful

Bread Street Kitchen restaurant in the City. Later in the

year we're expecting an opening on Park Walk in Chelsea,

the site of his original restaurant Aubergine, where he

gained his rst and second Michelin stars back in 1997.

the site earlier this year, though exact plans for it were

unconrmed at the time of going to press. We'd be very

happy if it just reopened as Aubergine. As for the future,

'there is no reason why we can't do 50 new restaurants

over the next ve years'. It sounds like Ramsay could be

coming soon to a street near you…