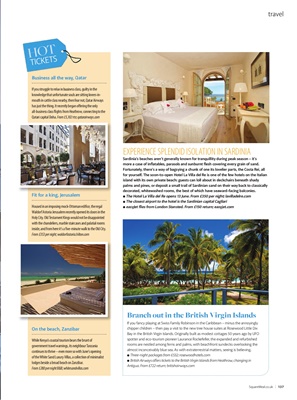 Business all the way, Qatar

If you struggle to relax in business class, guilty in the

in cattle class nearby, then fear not, Qatar Airways

has just the thing. It recently began offering the only

all-business class flights from Heathrow, connecting to the

Fit for a king, Jerusalem

Housed in an imposing mock-Ottoman edifice, the regal

Waldorf Astoria Jerusalem recently opened its doors in the

Holy City. Old Testament Kings would not be disappointed

with the chandeliers, marble staircases and palatial rooms

inside, and from here it's a five-minute walk to the Old City.

On the beach, Zanzibar

While Kenya's coastal tourism bears the brunt of

continues to thrive - even more so with June's opening

of the White Sand Luxury Villas, a collection of minimalist

lodges beside a broad beach on Zanzibar.

From £280 per night B&B; whitesandvillas.com

Branch out in the British Virgin Islands

Bay in the British Virgin Islands. Originally built as modest cottages 50 years ago by UFO

spotter and eco-tourism pioneer Laurance Rockefeller, the expanded and refurbished

rooms are nestled among ferns and palms, with beachfront sundecks overlooking the

more a case of in­ atables, parasols and sunburnt ­ esh covering every grain of sand.

Fortunately, there's a way of bagsying a chunk of one its lovelier parts, the Costa Rei, all

for yourself. The soon-to-open Hotel La Villa del Re is one of the few hotels on the Italian

island with its own private beach: guests can loll about in deckchairs beneath shady

palms and pines, or deposit a small trail of Sardinian sand on their way back to classically

decorated, whitewashed rooms, the best of which have seaward-facing balconies.

The Hotel La Villa del Re opens 13 June. From £350 per night; lavilladelre.com

The closest airport to the hotel is the Sardinian capital Cagliari

Business all the way, Qatar

If you struggle to relax in business class, guilty in the