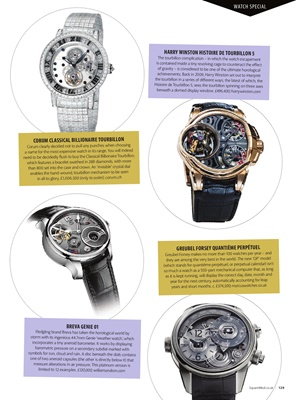 Corum clearly decided not to pull any punches when choosing

a name for the most expensive watch in its range. You will indeed

need to be decidedly  ush to buy the Classical Billionaire Tourbillon,

which features a bracelet swathed in 288 diamonds, with more

than 800 set into the case and crown. An 'invisible' crystal dial

enables the hand-wound, tourbillon mechanism to be seen

The tourbillon complication - in which the watch escapement

of gravity - is considered to be one of the ultimate horological

achievements. Back in 2009, Harry Winston set out to interpret

the tourbillon in a series of di erent ways, the latest of which, the

beneath a domed display window. £496,400; harrywinston.com

Fledgling brand Breva has taken the horological world by

storm with its ingenious 44.7mm Genie 'weather watch', which

incorporates a tiny aneroid barometer. It works by displaying

barometric pressure on a secondary subdial marked with

symbols for sun, cloud and rain. A disc beneath the dials contains

measure alterations in air pressure. This platinum version is

Greubel Forsey makes no more than 100 watches per year - and

they are among the very best in the world. The new 'QP' model

(which stands for quantième perpétuel, or perpetual calendar) isn't

so much a watch as a 550-part mechanical computer that, as long

as it is kept running, will display the correct day, date, month and