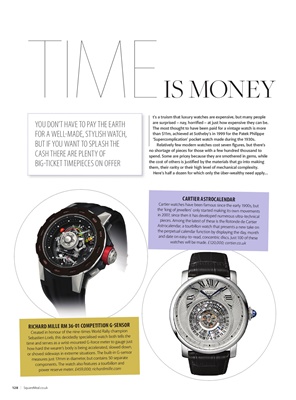 t's a truism that luxury watches are expensive, but many people

are surprised - nay, horri� ed - at just how expensive they can be.

'Supercomplication' pocket watch made during the 1930s.

spend. Some are pricey because they are smothered in gems, while

them, their rarity or their high level of mechanical complexity.

YOU DON'T HAVE TO PAY THE EARTH

FOR A WELL�MADE, STYLISH WATCH,

BUT IF YOU WANT TO SPLASH THE

CASH THERE ARE PLENTY OF

Created in honour of the nine-times World Rally champion

Sebastien Loeb, this decidedly specialised watch both tells the

how hard the wearer's body is being accelerated, slowed down,

or shoved sideways in extreme situations. The built-in G-sensor

components. The watch also features a tourbillon and

Cartier watches have been famous since the early 1900s, but

the 'king of jewellers' only started making its own movements

in 2007, since then it has developed numerous ultra-technical

pieces. Among the latest of these is the Rotonde de Cartier

Astrocalendar, a tourbillon watch that presents a new take on

the perpetual calendar function by displaying the day, month

and date on easy-to-read, concentric discs. Just 100 of these