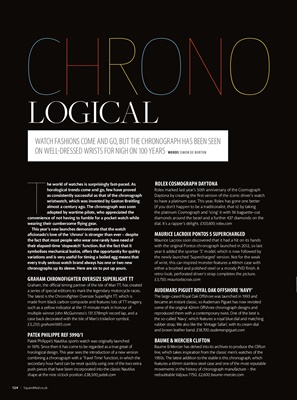 The world of watches is surprisingly fast-paced. As

as consistently successful as that of the chronograph

wristwatch, which was invented by Gaston Breitling

almost a century ago. The chronograph was soon

adopted by wartime pilots, who appreciated the

convenience of not having to fumble for a pocket watch while

This year's new launches demonstrate that the watch

a cionado's love of the 'chrono' is stronger than ever - despite

their elapsed-time 'stopwatch' function. But the fact that it

every truly serious watch brand always has one or two new

chronographs up its sleeve. Here are six to put up yours.

Graham, the o� cial timing partner of the Isle of Man TT, has created

a series of special editions to mark the legendary motorcycle races.

The latest is the Chrono� ghter Oversize Superlight TT, which is

made from black carbon composite and features lots of TT imagery,

case back decorated with the Isle of Man's triskelion symbol.

in 1976. Since then it has come to be regarded as a true great of

horological design. This year sees the introduction of a new version

combining a chronograph with a 'Travel Time' function, in which the

push pieces that have been incorporated into the classic Nautilus

Daytona by creating the � rst version of the iconic driver's watch

to have a platinum case. This year, Rolex has gone one better

(if you don't happen to be a traditionalist, that is) by taking

the platinum Cosmograph and 'icing' it with 36 baguette-cut

diamonds around the bezel and a further 437 diamonds on the

with the original Pontos chronograph launched in 2012, so last

year it added the sportier 'S' model, which is now followed by

the newly launched 'Supercharged' version. Not for the weak

of wrist, this car-inspired monster features a 48mm case with

either a brushed and polished steel or a moody PVD � nish. A

became an instant classic, so Audemars Piguet has now revisited

some of the original 42mm O shore chronograph designs and

reproduced them with a contemporary twist. One of the best is

the so-called 'Navy', which features a royal blue dial and matching

rubber strap. We also like the 'Vintage Safari', with its cream dial

Baume  Mercier has delved into its archives to produce the Clifton

line, which takes inspiration from the classic men's watches of the

1950s. The latest addition to the stable is this chronograph, which

movements in the history of chronograph manufacture - the

WATCH FASHIONS COME AND GO, BUT THE CHRONOGRAPH HAS BEEN SEEN