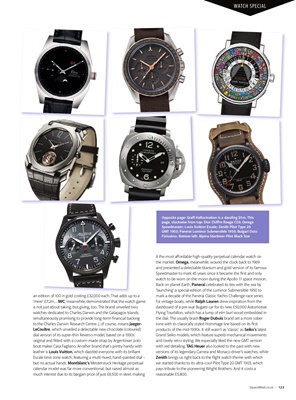 is not just about taking, but giving, too. The brand unveiled two

watches dedicated to Charles Darwin and the Galapagos Islands,

dial version of its super-thin Reverso model, based on a 1930s

original and  tted with a custom-made strap by Argentinian polo

leather is Louis Vuitton, which dazzled everyone with its brilliant

calendar model was far more conventional, but raised almost as

much interest due to its bargain price of just £8,500 in steel, making

it the most a

the market. Omega, meanwhile, wound the clock back to 1969

and presented a delectable titanium and gold version of its famous

watch to be worn on the moon during the Apollo 11 space mission.

Back on planet Earth, Panerai celebrated its ties with the sea by

'launching' a special edition of the Luminor Submersible 1950 to

for vintage boats, while Ralph Lauren drew inspiration from the

dashboard of a pre-war Bugatti car for its new £50,000 Automotive

Flying Tourbillon, which has a lump of elm burl wood embedded in

tone with its classically styled Hommage line based on its  rst

products of the mid-1990s. It still wasn't as 'classic' as Seiko's latest

with red detailing. TAG Heuer also looked to the past with new

versions of its legendary Carrera and Monaco driver's watches, while

we started thanks to its ultra-cool Pilot Type 20 GMT 1903, which

pays tribute to the pioneering Wright Brothers. And it costs a

Opposite page: Gra Hallucination is a dazzling $5m. This