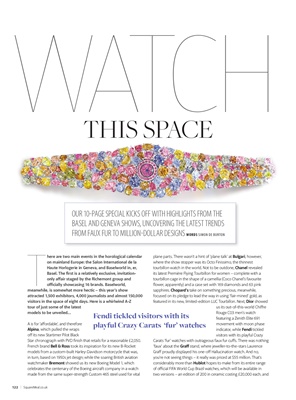 There are two main events in the horological calendar

Haute Horlogerie in Geneva, and Baselworld in, er,

a air staged by the Richemont group and

visitors in the space of eight days. Here is a whirlwind A-Z

tour of just some of the latest

models to be unveiled…

Alpina, which pulled the wraps

Star chronograph with PVD  nish that retails for a reasonable £2,050.

models from a custom-built Harley-Davidson motorcycle that was,

in turn, based on 1950s jet design; while the soaring British aviation

watchmaker Bremont showed us its new Boeing Model 1, which

celebrates the centenary of the Boeing aircraft company in a watch

plane parts. There wasn't a hint of 'plane talk' at Bulgari, however,

where the show stopper was its Octo Finissimo, the thinnest

tourbillon watch in the world. Not to be outdone, Chanel revealed

its latest Première Flying Tourbillon for women - complete with a

tourbillon cage in the shape of a camellia (Coco Chanel's favourite

focused on its pledge to lead the way in using 'fair-mined' gold, as

featured in its new, limited-edition LUC Tourbillon. Next, Dior showed

us its out-of-this-world Chi

visitors with its playful Crazy

s. There was nothing

'faux' about the G r a  stand, where jeweller-to-the-stars Laurence

Hallucination watch. And no,

you're not seeing things - it really was priced at $55 million. That's

considerably more than Hublot hopes to make from its entire range

of o¤ cial FIFA World Cup Brazil watches, which will be available in

OUR 10�PAGE SPECIAL KICKS OFF WITH HIGHLIGHTS FROM THE

Fendi tickled visitors with its