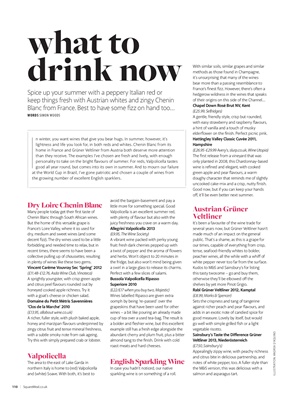 Many people today get their

But the home of this versatile grape is

France's Loire Valley, where it iss used for

dry, medium and sweet wines (and some

zz). The dry wines used to be a little

forbidding and needed time to relax, but in

recent times, there seems to have been a

collective pulling up of chaussettes, resulting

and citrus peel avours rounded out by

with a goat's cheese or chicken salad.

honey and marzipan avours underpinned by

with a subtle smoky note from oak ageing.

Try this with simply prepared crab or lobster.

The area to the east of Lake Garda in

and (white) Soave. With both, it's best to

Spice up your summer with a peppery Italian red or

avoid the bargain-basement and pay a

little more for something special. Good

Valpolicella is an excellent summer red,

with plenty of avour but also with the

juicy freshness you crave on a warm day.

a twist of pepper and the aroma of owers

and herbs. Won't object to 20 minutes in

the fridge, but also won't mind being given

a swirl in a large glass to release its charms.

Perfect with a few slices of salami.

Wines labelled Ripasso are given extra

oomph by being 're-passed' over the

grapeskins that have been used for other

cup of tea over a used tea-bag. The result is

a bolder and eshier wine, but this excellent

example still has a fresh edge alongside the

abundant cherry and plum fruit, plus a bitter

almond tang to the

In case you hadn't noticed, our native

sparkling wine is on something of a roll.

methods as those found in Champagne,

it's unsurprising that many of the wines

bear more than a passing resemblance to

zz. However, there's often a

hedgerow wildness in the wines that speaks

of their origins on this side of the Channel…

with easy strawberry and raspberry avours,

a hint of vanilla and a touch of musky

rst release from a vineyard that was

only planted in 2008, this Chardonnay-based

ned and elegant, with cooked

doughy character that reminds me of slightly

uncooked cake-mix and a crisp, nutty

Good now, but if you can keep your hands

o, it'll be even better next summer.

It's been a favourite of the wine trade for

made much of an impact on the general

public. That's a shame, as this is a grape for

our times, capable of everything from crisp,

peachier wines, all the while with a whi of

white pepper never too far from the surface.

Kudos to MS and Sainsbury's for listing

this tasty twosome - go and buy them,

otherwise they'll be elbowed o the

shelves by yet more Pinot Grigio.

Sets the crispness and tang of tangerine

against richer peach and pear avours, and

adds in an exotic note of candied spice for

good measure. Lovely by itself, but would

sh or a light

and citrus bite in delicious partnership, and

notes of white pepper, too. A fuller style than

the MS version, this was delicious with a

n winter, you want wines that give you bear hugs. In summer, however, it's

lightness and life you look for, in both reds and whites. Chenin Blanc from its

than they receive. The examples I've chosen are fresh and lively, with enough

personality to take on the bright avours of summer. For reds, Valpolicella tastes

good all year round, but comes into its own in summer. And to mourn our failure

at the World Cup in Brazil, I've gone patriotic and chosen a couple of wines from