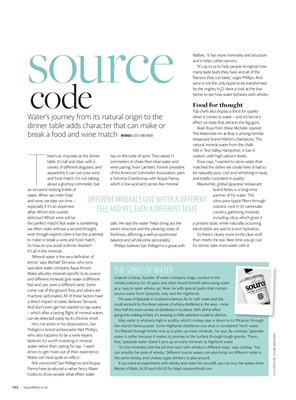 There's an imposter at the dinner

table. It's tall and clear, with a

variety of di� erent disguises, and

apparently it can ruin your wine

and food match. I'm not talking

about a grumpy sommelier, but

an innocent-looking bottle of

water. When we order food

and wine, we take our time -

especially if it's an expensive

a� air. Which dish sounds

delicious? Which wine will be

the perfect match? But water is something

we often order without a second thought,

even though experts claim it has the potential

to make or break a wine and food match.

So how do you avoid a dinner disaster?

It's all in the minerals.

'Mineral water is the very de­ nition of

and di� erent minerals give water a di� erent

feel and, yes, even a di� erent taste. Some

come out of the ground ­ zzy and others are

machine carbonated. All of these factors have

And don't even get him started on tap water

- which after a tasting   ight of mineral waters

can be detected easily by its chlorine smell.

He's not alone in his observations. San

who also happens to be a wine expert,

believes it's worth investing in mineral

water rather than opting for tap. 'I want

diners to get more out of their experience.

Water can have quite an e� ect.'

Not convinced? San Pellegrino and Acqua

Panna have produced a rather fancy Water

has on the taste of wine. They asked 11

of the American Sommelier Association, pairs

a Sonoma Chardonnay with Acqua Panna,

which is low-acid and carries few mineral

salts. He says the water 'helps bring out the

wine's structure and the pleasing notes of

Malbec. 'It has more minerality and structure

and it helps soften tannins.

'It's up to us to help people recognise how

many taste buds they have and all of the

  avours they can taste,' urges Phillips. And

wine is not the only tipple to be transformed

by the mighty H2O. Have a look at the box

below to see how water behaves with whisky.

when it comes to water - and it's terroir's

e� ect on taste that attracts the big guns.

The Waterside Inn at Bray is among familiar

natural mineral water from the chalk

hills in Test Valley, Hampshire, is low in

Roux says, 'I wanted to serve water that

matched the dishes we create here. It had to

be naturally pure, cool and refreshing in taste,

and totally consistent in quality.'

brand Nobu is a long-time

partner of Fiji water. This

volcanic rock in its namesake

including silica, which gives it

a pristine taste, while naturally occurring

electrolytes are said to boost hydration.

So there's clearly more to the clear stu�

than meets the eye. Next time you go out

for dinner, take more water with it.

sourcecodeWater's journey from its natural origin to the

dinner table adds character that can make or

THE SPIRIT OF WATER

Graeme Lindsay, founder of water company Uisge, worked in the

whisky industry for 10 years and often found himself advocating water

as a 'way to open whisky up'. Now, he sells special packs that contain

source water from Speyside, Islay and the Highlands.

than half the total number of distilleries in Scotland. With all this e� ort

going into making whisky, it's amazing so little attention is paid to dilution.

Islay water is relatively high in acidity, which Lindsay says is down to its ­ ltration through

the island's famous peat. Some Highlands distilleries use what is considered 'hard' water.

'It's ­ ltered through brittle rock so it picks up more minerals,' he says. By contrast, Speyside

water is softer because it makes its journey to the surface through tough granite. Therefore,

Speyside water doesn't pick up as many minerals as Highland water.

'It's the minerality and the pH that react with whisky in di� erent ways,' says Lindsay. 'You

can amplify the taste of whisky.' Di� erent source waters can also bring out di� erent notes in

the same whisky, and Lindsay urges drinkers to play around.

If you want to experiment with whisky and water for yourself, you can buy the waters from

Islay water is relatively high in acidity, which Lindsay says is down to its ­ ltration through

DIFFERENT MINERALS GIVE WATER A DIFFERENT

FEEL AND YES, EVEN A DIFFERENT TASTE