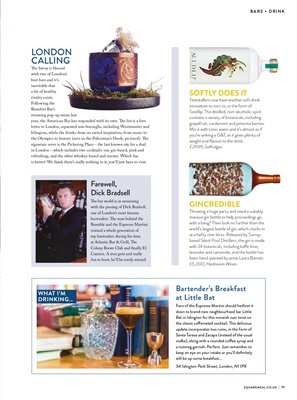 Teetotallers now have another soft drink

innovation to turn to, in the form of

contains a variety of botanicals, including

Mix it with tonic water and it's almost as if

you're sinking a G&T, as it gives plenty of

weight and fl avour to the drink.

Throwing a huge party and need a suitably

with a bang? Then look no further than the

world's largest bottle of gin, which clocks in

at a hefty nine litres. Released by Surreybased

Silent Pool Distillers, the gin is made

with 24 botanicals, including ka r lime,

lavender and camomile, and the bottle has

been hand-painted by artist Laura Barrett.

Fans of the Espresso Martini should hotfoot it

down to brand-new neighbourhood bar Little

Bat in Islington for this moreish rum twist on

update incorporates two rums, in the form of

Santa Teresa and Zacapa (instead of the usual

vodka), along with a rounded co ee syrup and

keep an eye on your intake or you'll defi nitely

still be up come breakfast…

� e bar world is in mourning

with the passing of Dick Bradsell,

one of London's most famous

bartenders. � e man behind the

Bramble and the Espresso Martini

trained a whole generation of

top bartenders during his time

Camion. A true gent and really

with two of London's

best bars and it's

a bit of healthy

year, the American Bar has responded with its own. � e list is a love

letter to London, separated into boroughs, including Westminster and

Islington, while the drinks draw on varied inspiration, from music to

the Olympics to history (seen in the Policeman's Hook, pictured). � e

in London - which includes two cocktails: one gin-based, pink and

refreshing, and the other whiskey-based and sterner. Which bar

is better? We think there's really nothing in it, you'll just have to visit.