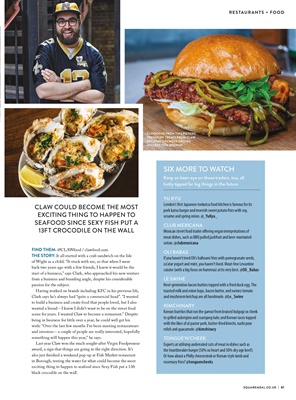 THE STORY: It all started with a crab sandwich on the Isle

of Wight as a child. "It stuck with me, so that when I went

back two years ago with a few friends, I knew it would be the

start of a business," says Clark, who approached his new venture

from a business and branding angle, despite his considerable

passion for the subject.

Having worked on brands including KFC in his previous life,

Clark says he's always had "quite a commercial head". "I wanted

to build a business and create food that people loved, but I also

scene for years. I wanted Claw to become a restaurant." Despite

being in business for little over a year, he could well get his

wish: "Over the last few months I've been meeting restaurateurs

and investors - a couple of people are really interested, hopefully

something will happen this year," he says.

award, a sign that things are going in the right direction. It's

in Borough, testing the water for what could become the most

black crocodile on the wall.

Keep an keen eye on these traders, too, all

hotly tipped for big things in the future

London's �rst Japanese tonkatsu food kitchen is famous for its

meat dishes, such as BBQ pulled jackfruit and beer-marinated

If you haven't tried Oli's halloumi fries with pomegranate seeds,

cuisine (with a big focus on hummus) at its very best. @Oli_Babas

Next-generation bacon butties topped with a fried duck egg. The

and mushroom ketchup are all handmade. @Le_Swine

to grilled aubergine and ssamjang kale; and Korean tacos topped

Experts at utilising underrated cuts of meat in dishes such as

Or how about a Philly cheesesteak or Roman style lamb and

CLAW COULD BECOME THE MOST

EXCITING THING TO HAPPEN TO

SEAFOOD SINCE SEXY FISH PUT A

13FT CROCODILE ON THE WALL

CLOCKWISE FROM THIS PICTURE: