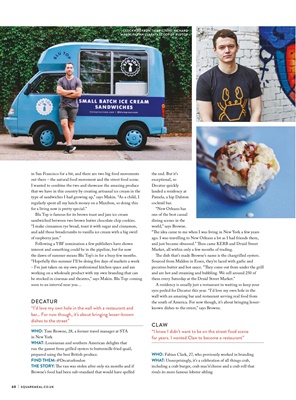 in San Francisco for a bit, and there are two big food movements

out there - the natural food movement and the street food scene.

I wanted to combine the two and showcase the amazing produce

type of sandwiches I had growing up," says Makin. "As a child, I

regularly spent all my lunch money on a Maxibon, so doing this

for a living now is pretty special."

"I make cinnamon rye bread, toast it with sugar and cinnamon,

Following a YBF nomination a few publishers have shown

interest and something could be in the pipeline, but for now

the dawn of summer means Blu Top's in for a busy few months.

- I've just taken on my own professional kitchen space and am

working on a wholesale product with my own branding that can

soon to an interval near you…

bar… For now though, it's about bringing lesser-known

dishes to the street"

WHO: Tom Browne, 28, a former travel manager at STA

WHAT: Louisianan and southern American delights that

run the gamut from grilled oysters to buttermilk-fried quail,

THE STORY: �e van was stolen after only six months and if

Browne's food had been sub-standard that would have spelled

the end. But it's

landed a residency at

one of the best casual

dining scenes in the

ago. I was travelling to New Orleans a lot as I had friends there,

Market, all within only a few months of trading.

�e dish that's made Browne's name is the chargrilled oysters.

Sourced from Maldon in Essex, they're laced with garlic and

pecorino butter and hot sauce. "�ey come out from under the grill

and are hot and steaming and bubbling. We sell around 250 of

them every Saturday at the Druid Street Market."

eyes peeled for Decatur this year. "I'd love my own hole in the

wall with an amazing bar and restaurant serving real food from

the south of America. For now though, it's about bringing lesserknown

dishes to the street," says Browne.

for years. I wanted Claw to become a restaurant"

WHO: Fabian Clark, 27, who previously worked in branding

WHAT: Unsurprisingly, it's a celebration of all things crab,

including a crab burger, crab mac'n'cheese and a crab roll that

CLOCKWISE FROM THIS PICTURE: RICHARD