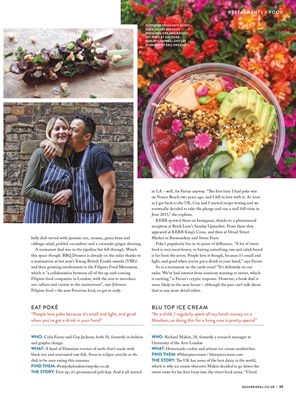 A restaurant deal was in the pipeline but fell through. Watch

this space though. BBQ Dreamz is already on the radar thanks to

and their growing involvement in the Filipino Food Movement,

which is "a collaboration between all of the up-and-coming

Filipino food companies in London, with the aim to introduce

our culture and cuisine to the mainstream", says Johnson.

Filipino food = the new Peruvian food, so get in early.

"People love poke because it's small and light, and good

when you've got a drink in your hand"

WHO: Celia Farrar and Guy Jackson, both 30, formerly in fashion

WHAT: A kind of Hawaiian version of sushi that's made with

black rice and marinated raw fish. Soon to eclipse ceviche as the

dish to be seen eating this summer.

THE STORY: First up, it's pronounced poh-kay. And it all started

in LA - well, for Farrar anyway. "�e first time I had poke was

on Venice Beach two years ago, and I fell in love with it. As soon

as I got back to the UK, Guy and I started recipe testing and we

KERB spotted them on Instagram, thanks to a phenomenal

reception at Brick Lane's Sunday Upmarket. From there they

appeared at KERB King's Cross, and then at Druid Street

Market in Bermondsey and Street Feast.

Poke's popularity lies in its point of difference. "A lot of street

food is very meat-heavy, so having something raw and salad-based

is far from the norm. People love it though, because it's small and

light, and good when you've got a drink in your hand," says Farrar.

So is a restaurant on the cards soon? "It's definitely on our

radar. We've had interest from someone wanting to invest, which

is exciting," is Farrar's cryptic response. However, a book deal is

that in any more detail either.

"As a child, I regularly spent all my lunch money on a

Maxibon, so doing this for a living now is pretty special"

WHO: Richard Makin, 28, formerly a research manager at

University of the Arts London

THE STORY: �e UK has some of the best dairy in the world,

sweet route for his first foray into the street food arena. "I lived