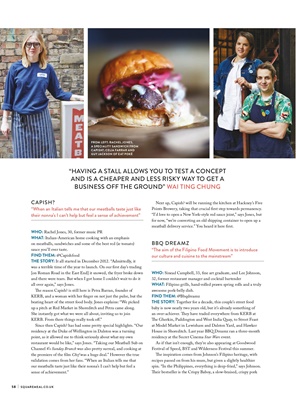 "When an Italian tells me that our meatballs taste just like

their nonna's I can't help but feel a sense of achievement"

WHAT: Italian-American home cooking with an emphasis

on meatballs, sandwiches and some of the best red (ie tomato)

THE STORY: It all started in December 2012. "Admittedly, it

was a terrible time of the year to launch. On our first day's trading

[on Roman Road in the East End] it snowed, the fryer broke down

and there were tears. But when I got home I couldn't wait to do it

all over again," says Jones.

KERB, and a woman with her finger on not just the pulse, but the

up a pitch at Red Market in Shoreditch and Petra came along.

She instantly got what we were all about, inviting us to join

KERB. From there things really took off."

Since then Capish? has had some pretty special highlights. "Our

residency at the Duke of Wellington in Dalston was a turning

point, as it allowed me to think seriously about what my own

restaurant would be like," says Jones. "Taking our Meatball Sub on

the premiere of the film Chef was a huge deal." However the true

validation comes from her fans. "When an Italian tells me that

Next up, Capish? will be running the kitchen at Hackney's Five

"I'd love to open a New York-style red sauce joint," says Jones, but

for now, "we're converting an old shipping container to open up a

"The aim of the Filipino Food Movement is to introduce

our culture and cuisine to the mainstream"

WHAT: Filipino grills, hand-rolled prawn spring rolls and a truly

THE STORY: Together for a decade, this couple's street food

baby is now nearly two years old, but it's already something of

an over-achiever. �ey have traded everywhere from KERB at

at Model Market in Lewisham and Dalston Yard, and Hawker

As if that isn't enough, they're also appearing at Goodwood

Festival of Speed, BST and Wilderness Festival this summer.

recipes passed on from his mum, but given a slightly healthier

spin. "In the Philippines, everything is deep-fried," says Johnson.

�eir bestseller is the Crispy Baboy, a slow-braised, crispy pork

"HAVING A STALL ALLOWS YOU TO TEST A CONCEPT

AND IS A CHEAPER AND LESS RISKY WAY TO GET A

A SPECIALITY SANDWICH FROM