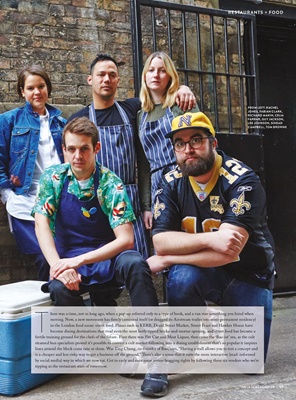 There was a time, not so long ago, when a pop-up referred only to a type of book, and a van was something you hired when

moving. Now, a new movement has fi rmly cemented itself (or dragged its Airstream trailer into semi-permanent residency)

in the London food scene: street food. Places such as KERB, Druid Street Market, Street Feast and Hawker House have

become dining destinations that rival even the most hotly tipped bricks-and-mortar opening, and street food has become a

fertile training ground for the chefs of the future. First there was Pitt Cue and Meat Liquor, then came the 'Bao-ist' era, as the cult

lines around the block come rain or shine. Wai Ting Chung, co-founder of Bao, says, "Having a stall allows you to test a concept and

is a cheaper and less risky way to get a business off the ground." � ere's also a sense that it suits the more interactive (read: informed

by social media) way in which we now eat. Get in early and earn some serious bragging rights by following these six vendors who we're

tipping as the restaurant stars of tomorrow.