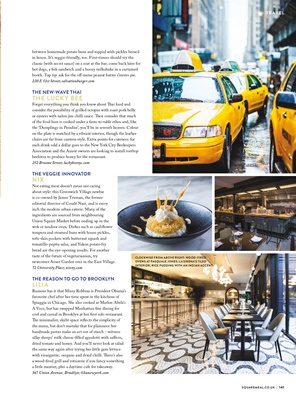 between homemade potato buns and topped with pickles brined

in house. It's veggie-friendly, too. First-timers should try the

classic (with secret sauce) on a seat at the bar; come back later for

hot dogs, a fish sandwich and a boozy milkshake in a curtained

Forget everything you think you know about �ai food and

consider the possibility of grilled octopus with roast pork belly

or oysters with nahm jim chilli sauce. �en consider that much

of the food here is cooked under a farm-to-table ethos and, like

the 'Dumplings in Paradise', you'll be in seventh heaven. Colour

on the plate is matched by a vibrant interior, though the leather

chairs are far from canteen style. Extra points for cuteness: for

Association and the Aussie owners are looking to install rooftop

beehives to produce honey for the restaurant.

about style: this Greenwich Village newbie

is co-owned by James Truman, the former

editorial director of Condé Nast, and is every

inch the modern urban eaterie. Many of the

ingredients are sourced from neighbouring

Union Square Market before ending up in the

wok or tandoor oven. Dishes such as cauliflower

tofu-skin pockets with butternut squash and

bread are the eye-opening results. For another

taste of the future of vegetarianism, try

newcomer Avant Garden over in the East Village.

THE REASON TO GO TO BROOKLYN

Rumour has it that Missy Robbins is President Obama's

favourite chef after her time spent in the kitchens of

Spiaggia in Chicago. She also cooked at Marlon Abela's

A Voce, but has swapped Manhattan fine dining for

cool and casual in Brooklyn at her first solo restaurant.

the menu, but don't mistake that for plainness: her

handmade pastas make an art out of starch - witness

dried tomato and honey. And you'll never look at salad

the same way again after trying her little gem lettuce

a wood-fired grill and rotisserie if you fancy something

a little meatier, plus a daytime cafe for takeaway.

CLOCKWISE FROM ABOVE RIGHT: WOOD�FIRED