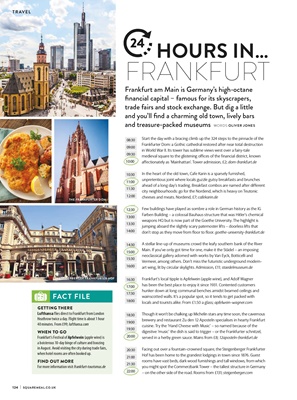 Frankfurter Dom: a Gothic cathedral restored after near total destruction

in World War II. Its tower has sublime views west over a fairy-tale

medieval square to the glistening offices of the financial district, known

Frankfurt am Main is Germany's high-octane

financial capital - famous for its skyscrapers,

trade fairs and stock exchange. But dig a little

In the heart of the old town, Cafe Karin is a sparsely furnished,

ahead of a long day's trading. Breakfast combos are named after different

city neighbourhoods: go for the Nordend, which is heavy on Teutonic

Farben Building - a colossal Bauhaus structure that was Hitler's chemical

weapons HQ but is now part of the Goethe University. The highlight is

jumping aboard the slightly scary paternoster lifts - doorless lifts that

don't stop as they move from floor to floor. goethe-university-frankfurt.de

Main. If you've only got time for one, make it the Städel - an imposing

neoclassical gallery adorned with works by Van Eyck, Botticelli and

Vermeer, among others. Don't miss the futuristic underground modernart

has been the best place to enjoy it since 1931. Contented customers

hunker down at long communal benches amidst beamed ceilings and

wainscotted walls. It's a popular spot, so it tends to get packed with

locals and tourists alike. From £1.50 a glass; apfelwein-wagner.com

Though it won't be chalking up Michelin stars any time soon, the cavernous

cuisine. Try the 'Hand Cheese with Music' - so named because of the

digestive 'music' the dish is said to trigger - or the Frankfurter schnitzel,

served in a herby green sauce. Mains from £8; 12aposteln-frankfurt.de

Facing out over a fountain-crowned square, the Steigenberger Frankfurter

Hof has been home to the grandest lodgings in town since 1876. Guest

rooms have vast beds, dark wood furnishings and tall windows, from which

you might spot the Commerzbank Tower - the tallest structure in Germany

- on the other side of the road. Rooms from £131; steigenberger.com

Heathrow twice a day. Flight time is about 1 hour

a boisterous 10-day binge of culture and boozing

in August. Avoid visiting the city during trade fairs,

when hotel rooms are often booked up.