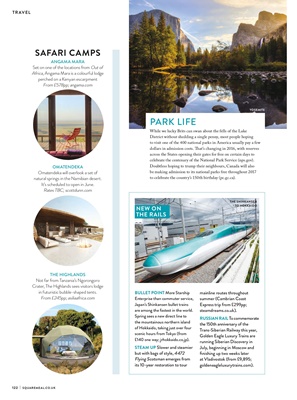 Set on one of the locations from Out of

perched on a Kenyan escarpment

Omatendeka will overlook a set of

natural springs in the Namibian desert.

It's scheduled to open in June.

Not far from Tanzania's Ngorongoro

are among the fastest in the world.

of Hokkaido, taking just over four

scenic hours from Tokyo (from

STEAM UP Slower and steamier

its 10-year restoration to tour

the 150th anniversary of the

July, beginning in Moscow and

District without shedding a single penny, most people hoping

dollars in admission costs. �at's changing in 2016, with reserves

celebrate the centenary of the National Park Service (nps.gov).

Doubtless hoping to trump their neighbours, Canada will also

be making admission to its national parks free throughout 2017